The Vontaze Burfict Workout focuses on his lower body. NFL defensive players, especially the front 7, have to have a strong lower body. They have to go up against offensive lineman much bigger than them, make quick changes in direction, chase down running backs faster than them. 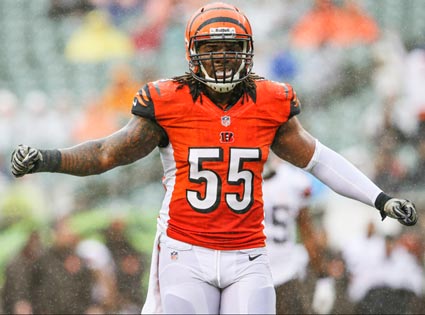 Here’s the Vontaze Burfict Workout for his legs / lower body that prepares him for being a linebacker in the NFL.

(Click on the exercises, above, for a video demonstration / explanation.)

** = denotes doing the reps on each leg

He went from being undrafted out of college to being a Pro Bowl linebacker. For the Bengals in 2013, Vontaze Burfict had a league-leading 171 tackles. Talking about his workout routine, Vontaze Burfict says:

My training style is aggressive and I try to wear my bod out in the off-season just as if it were a game. In the mornings I run a mile, go to the sauna, eat breakfast, go do linebacker drills on the field, [and] lift weights.

Every game is a new game. Watch me this season and you’ll see the dedication.