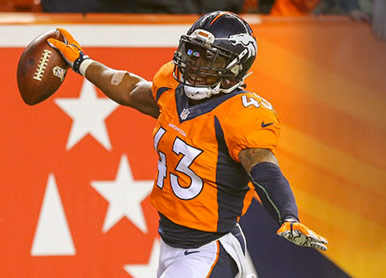 TJ Ward’s workout uses 3 primary drills to improve his NFL game. As a safety with the Denver Broncos, TJ Ward says his most important skill is his footwork. Hand-eye coordination is also important, especially for those key interceptions. 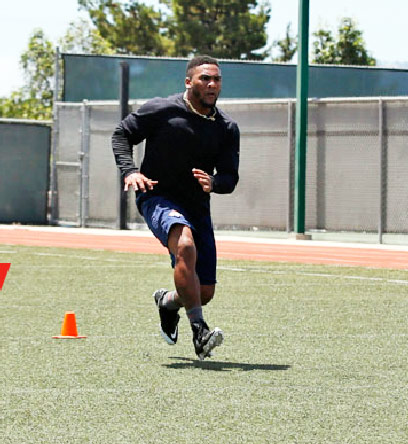 TJ Ward says the goals of his workout are to provide a solid foundation in footwork. The drills he uses get his hips and legs ready to react to how the receiver is breaking. With the right conditioning, and mental preparation, he’s ready to bring on the game:

It’s reaction. You’re muscles are used to doing it, because you’ve been doing it the whole training process. Being football fit is a different fit than any other type of training. You have to be full body fit. from the head to the toe.

His trainer says “it’s important to keep his lead foot pivoted as he makes changes of direction.” TJ Ward explains the T Drill:

TJ Ward uses the Backpedal React And Catch drill to work on reaction time. It’s also extremely useful for defensive backs to use the drill to improve their change of direction/agility.

For this workout, TJ’s trainer says to place 2 cones at a 10-yard distance to each other. Then, place another pair next to each one you’ve placed, with a 3-yard gap. This drill is all about reaction, catching the football and movement speed.

For DB’s, everything is about reaction. You have to react to the ball in the air. React to the receiver running routes, react to his cuts. This is a good drill because you have to focus on catching the ball before you react. A lot of times, you see DB’s running up the field before they catch it.

W Drills are uses to get defensive backs to make explosive changes of direction. With cones spread 5 yards apart, the football player is constantly accelerating from cone to cone. As a defensive back, TJ Ward spends much of this time working on his backpedaling. W drills work the hips and legs a lot.

Keep your shoulders over your toes. You always want to have a low level. A great center of gravity. It’s about controlling yourself. Coming out of your first 3 steps, and then controlling your break to where the receiver is taking you.

TJ Ward’s workout motivation comes from something his father once told him. His dad said that working out is like putting money in the bank. TJ says he learned:

Make big deposits into the bank. That way, when you go the bank to cash out, there’s a lot of money there for you.

TJ Ward says footwork and technique are the most important thing. If you have your technique down, speed will come later. But it doesn’t work the other way around. TJ explains what is most important:

As a DB, footwork is the most important thing. Being able to transition out of your breaks, being able to accelerate, being able to react. Secondly, hand-eye coordination because you want to get those interceptions.

Fighting for those interceptions, are all of TJ Ward’s Denver Broncos teammates. These include defensive backs Darian Stewart, Aquib Talib, Chris Harris Jr., Bradley Roby, Kayvon Webster, Lorenzo Doss and Omar Bolden. Although they do some these drills together with TJ Ward during the season, Ward does them all in the off-season. He works out with many NFL players at EXOS in Arizona.

TJ Ward says his workouts help him with being able to react quickly. The reaction speed he gains helps with:

Anticipation. It lets you be one step ahead. It’s like knowing what’s coming before it’s coming. You’re not guessing, but you have a good idea of what’s about to happen.

All of this training helps TJ Ward remain a versatile athlete. At safety, that’s a big deal. Ward can be asked to cover, blitz off the edge or drop into deep coverage. Whatever he’s doing on the football field, the footwork skills he works on are his primary advantage.