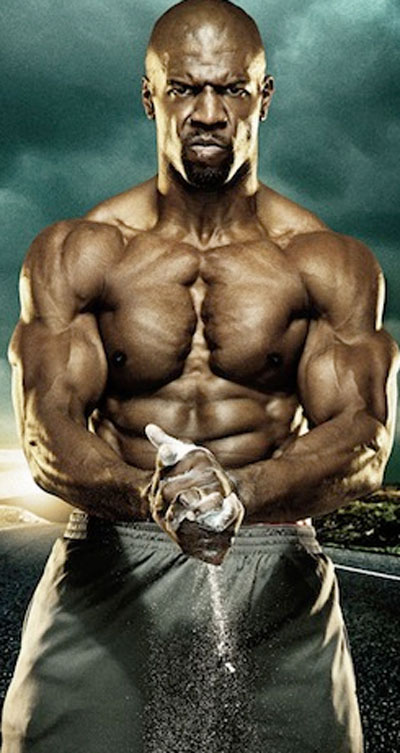 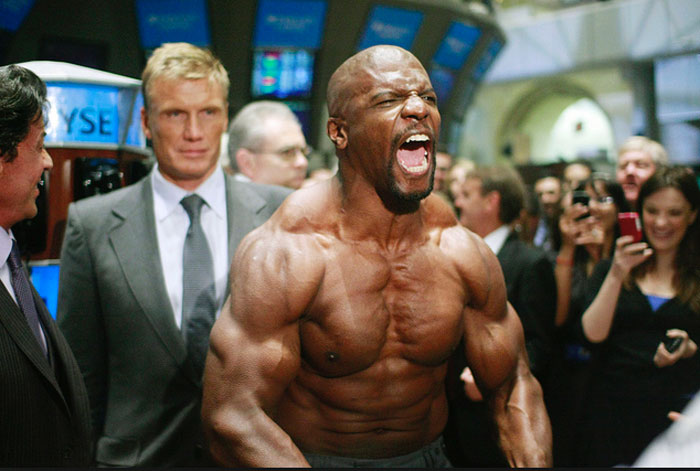 Terry Crews loved being a part of Expendables. He plays Halle Ceasar, the weapons specialist of the group. In The Expendables, Terry Crews is known for having a gun that he likes to call his girlfriend. In real life, Terry Crews says that his guns are his big arms. Lately, he’s been hosting “Who Wants To Be A Millionaire,” and starring on Brooklyn Nine-Nine.

Crews works especially hard on his shoulders and biceps. This is because the Terry Crews workout is all about getting your body ready, “to rock the “Gun Show” wherever you go.”

The Terry Crews Expendables Workout always starts with a cardio warmup. This is usually 5 minutes on a bike or treadmill. This is to get your blood flowing and heart pumping.

Terry Crews is famous for doing 24’s (Twenty-Fours) as part of his go-to workout routine. Often times, when filming The Expendables 2 and The Expendables 3, there wasn’t enough time to get everything done. So, Terry Crews made sure to at least get his 24’s done. This is a total body workout that relies heavily on the lower body, back, and shoulders. Terry Crews says that the 24’s workout mainly works the following body parts: 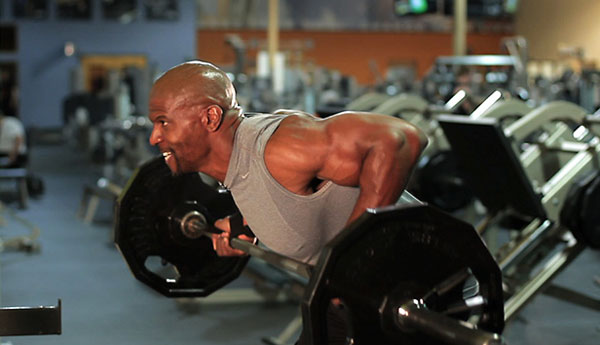 See Terry Crews demonstrate 24’s in the video below:

Terry Crews says that it’s all about bringing intensity to your workout. Terry says:

I workout very, very hard. My thing is to always be as hard, as cut as possible. But, within parameters, you don’t wan’t to be starving, with no strength. Plus, with a role like this, it takes a lot of energy man, to get through the days and make stuff work.  I train like I’m still in the NFL.

My workout through the week, it’s pretty much cardio every day. I get on the treadmill for a half hour at 7.0. Which, usually ends up with me running 3 1/2 miles every day. Monday is a shoulder day, where I do power cleans. I work my shoulders. Tuesday is my back day. Where, I do everything regarding back. Wednesday is strictly cardio, and I usually double up my cardio that day. Sometimes, I’ll do 5 miles instead of 3.5, and call it a day. Thursday is chest and arms. Then, Friday is a big, big legs day.

The Terry Crews workout comes with some key advice:

The above workout, where Terry Crews does his 24’s workout, is what he uses on Monday. This is the day he likes to really work his shoulders, but incorporates other body parts into his routine.

After doing 24’s, here’s the rest of the Terry Crews Monday routine:

Do 4 circuits of 10 reps of each (in superset/circuit format):

Finish the Terry Crews Monday Workout with Abs and then Cardio: 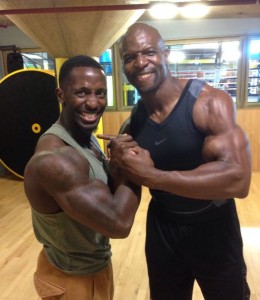 Everyone focuses on the push movement. But, to really get your back together, you have to focus just as hard on the pull movements. Ain’t no faking on this one, Ya’ll!

So, here’s the Terry Crews Back Workout Routine, that he says he uses on Tuesdays: 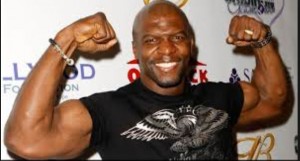 Keep your back arched. You don’t want to roll your back.

For the Pull Ups sets, you do just one set of each. But, you go to failure each exercise. Rest 30 seconds between each exercise in the Terry Crews Back Workout. For the Yates Row, try to go up in weight each set. For the Dumbbell Rows, you really want to concentrate, and squeeze your back all the way to the top. For the Hammer Strength rows, again, you want to add weight each set.

Concentrate on your back, as that’s where you really want the gains to be. On the last set of Hammer Strength Rows, again go to failure. Through each exercise, Terry Crews rests for 30 seconds between sets. Terry Crews says that you then do hyperextensions to make sure that your back is still all in one place. Terry Crews then finished with some abs to failure. Here’s the Terry Crews Workout Video where he illustrates his back workout:

The Terry Crews Wednesday Workout is a cardio routine:

If you can’t stand being on bike or treadmill for 45 minutes, then feel free to change machines every 15 minutes.