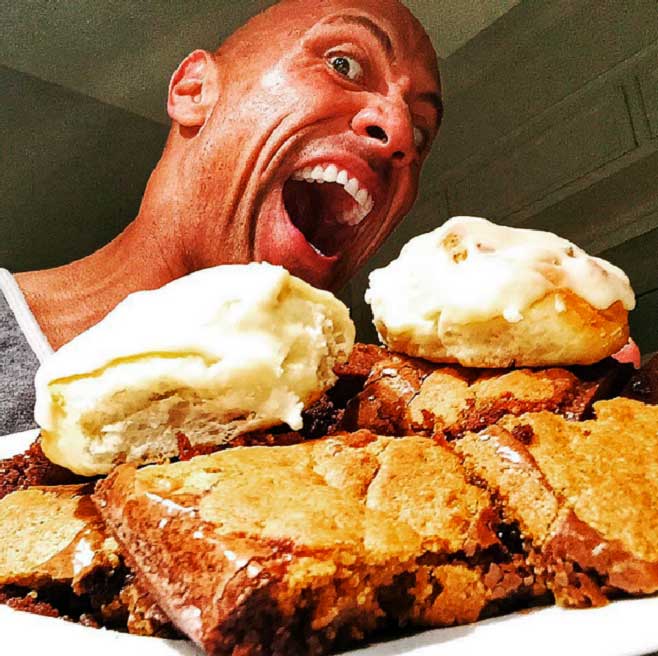 Sticking to your diet can be hard. Epic cheat meals are a way to make dieting easier. Motivate yourself so that by sacrificing now, you get a future reward. Convincing the brain that you’re not really on a diet is an effective tool. Sticking to your diet can be fueled by a cheat meal of pancakes, pizza, and chocolate brownies. The trick is to imagine those meals as a ‘reward,’ and focus your energy on what you will eat in the future.

When you’ve reached your goal weight, it’s time to celebrate. Stick to your diet. Don’t eat junk whenever your mind gets weak. The Rock recently photographed his latest cheat meal. Planning “Epic Cheat Meals” is how The Rock maintains his diet. After filming Central Intelligence, The Rock posted on his Instagram:

After 4 months of hard dieting, and eating clean due to filming Central Intelligence. This is going down right in the Johnson household…

He went on to say that his celebration included: 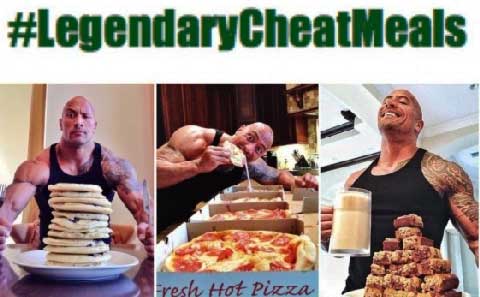 This isn’t the first time The Rock has used an epic cheat meal to maintain his diet. Dwayne Johnson’s diet for Pain & Gain was capped off with a cheat meal of 12 pancakes, 4 pizzas, 21 brownies, and a gallon of milk. For the movie Pain & Gain, Dwayne Johnson had to work out and eat right. More than ever before, he had to eat a ton of healthy food, while dreaming of his next cheat meal. The Rock workout links below contain his diet specifics:

Hercules used a similar approach to Pain & Gain. The Rock ate clean, 7 times a day, and worked out hard. Then, he celebrated with an epic cheat meal, and a bottle of special tequila.

Sticking To Your Diet

Most people have a hard time sticking to a diet. So, find a strategy that works for you. The Rock motivates himself by knowing if he sacrifices now, he’ll get a later reward. To be like The Rock, maintain your diet by planning your next cheat meal. That’s what The Rock does. He is happy resorting to planning “Epic Cheat Meals” months in advance.

By doing so, Dwayne ‘The Rock’ Johnson tricks his mind into thinking he’s not on a diet. The Rock is also a big fan of tequila. So, when he gets cravings, he imagines the expensive bottle he’ll be drinking soon. When promoting a recent film, The Rock was in London and requested something special. The Rock says:

London. Just Landed. Insisted my two dates be waiting in my hotel. Ms. Rare and Ms. Straight Up.

He was referring to a rare steak and a bottle of tequila, drinking it straight up.

When you diet to lose weight, your body should want to let go of fat. This comes not only from exercise and diet, but also being in the right state of mind. If you’re unhappy with what you’re eating, stress hormones will maintain fat on your body. Instead, motivate yourself by thinking about a future meal.

By tricking the brain into thinking about your next cheat meal you can avoid unhappiness. Find ways to be happy with what you’re eating. If you can’t, then get your brain to focus on your next cheat meal, instead. That’s the key when it comes to sticking to your diet.

Of course, even after all this work, The Rock’s biggest fan had a shocking revelation: 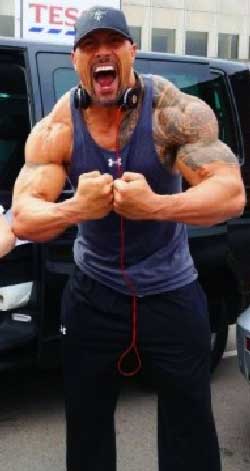 What would your cheat meal be?