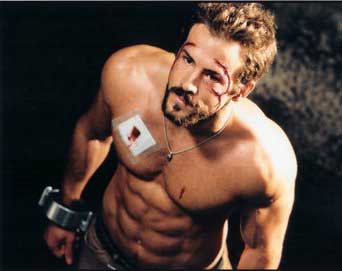 Workouts were about 2-3 hours. Generally starting off with around 500 – 1000 sit-ups. Then heavy weights for bulk. I’m a pretty scrawny guy so we cut cardio entirely and just focused on bulking up. Weight training involved a variety of exercises too numerous to mention at reps of about 8-12, for 6 days a week. After the first week I was longing for the sweet release of death, but soon enough got really into it.

Ryan Reynolds starts all his workouts with a 30 minute (or longer) abs routine. For Blade Trinity, Ryan Reynolds’ Monday workout would then focus on chest and arms.

The abs routine that Ryan Reynolds does is pretty crazy. Work your way up to it. Start by doing only a couple sets, and then wait until your abs are no longer sore. The worst thing you can do is overdo it, and then never want to do abs again. 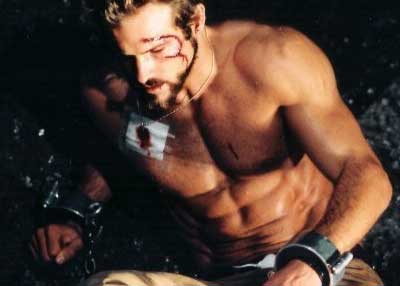 Ryan Reynolds explains the leg lifts his trainer had him do for Blade Trinity:

Lower abs are the hardest muscle to develop. Most males store their fat in the lower abdomen. The trainer had me using one of those exercise balls between my legs, lifting up and down, using my arms to anchor myself. I’d also put a 15 pound dumb-bell between my feet, and do leg raises while lying on the ground.

Ryan Reynolds says that in addition to training arms and abs, he would:

Work one body part per day, as in: chest day, back day, shoulder day, leg day, with arms mixed in. Don’t know what I was benching. I remember it wasn’t anything to brag about.

My trainer was a guy named Darren Chapman. He’s one of the most inspiring individuals I’ve ever met. A member of the UK’s Olympic bobsled team, he’s as adept at the nutritional training as he is the physical training. Also, a great guy that doesn’t mind me calling him every swear word ever heard in any language. He showed me how important the process of visualization is. Visualizing the transformation I had to make, I believe was key to making it happen. With this information, I began training as though preparing for the Olympics… 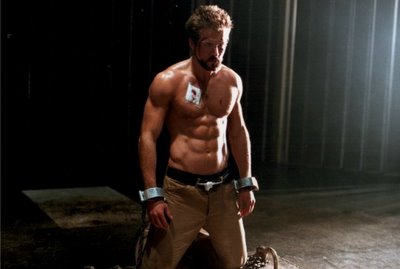 Ryan Reynolds Tuesday Workout Routine involved an Abs & Shoulders workout. Start with abs, then work your way to shoulders. The Shoulder workout will combine the use of dumbbell/barbell/cables.

Shoulder Workout: 4 sets of 8-12 reps for each exercise 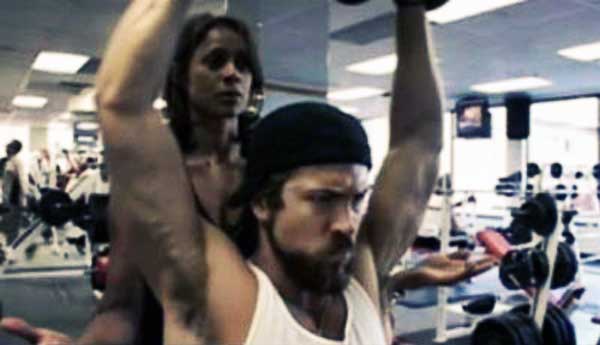 After joking that he used the “Thighmaster” to bulk his legs, Ryan Reynolds admits:

If you hate your workout, you’re not going to do it. Customize your fitness plan to meet your needs, [y]ou have to. If you’re going to commit to [the entire program], you’re going to have to find some way to make it bearable and enjoyable.