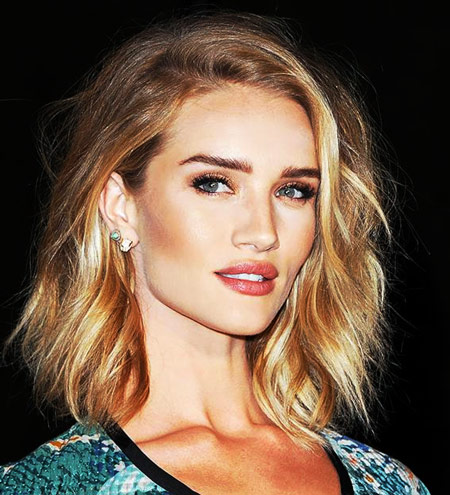 Prev postNext post
The Rosie Huntington-Whiteley diet is based on drinking lots of water, eating a healthy breakfast and drinking green smoothies. She eats as clean as possible throughout the day. Whether Huntington-Whiteley is at home, or on the road, she knows that there are always healthy options available to her.

Ranging from being a Victoria’s Secret model to starring in Mad Max: Fury Road, Rosie has to play many different roles. She says that by having a proper diet, everything else falls into place:

It’s so simple to get into shape, have more energy and glowing skin, by eating the right food… Health reflects in your skin, body and hair, and gives you a natural glow. 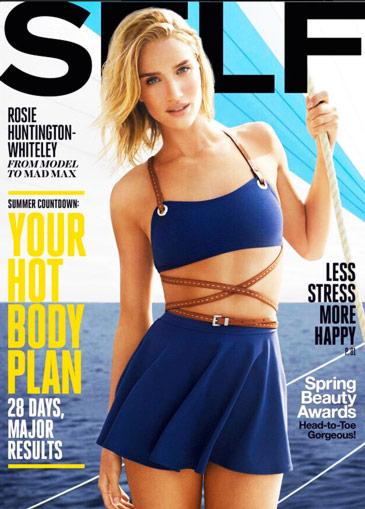 Rosie Huntington-Whiteley does not restrict her diet very much. If she’s preparing for a fashion shoot or movie, she’ll be specific about what she eats. Otherwise, she told Style Magazine:

I’m a big believer in not depriving myself of anything. I love to eat. I really enjoy food. It’s one of the many great things in life. But it’s all about finding balance and working out, making good choices for yourself whenever you can.

Drinking water is at the heart of Rosie Huntington-Whiteley’s diet. This is because water cleanses the body, and signals your body’s cells to readily shed excess water. In doing so, your body will become less bloated over time. 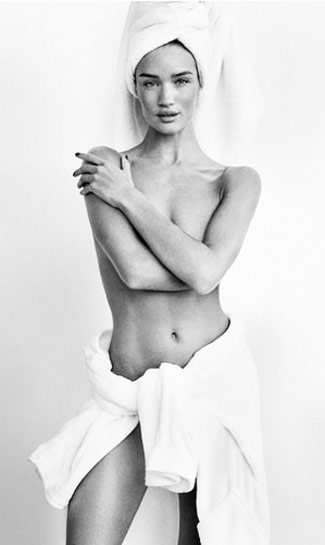 By not being forced (from dehydration) to retain water, drinking water helps Rosie Huntington-Whiteley lose weight. Many celebrities have found drinking water, along with avoiding salt, is what reduces bloating before a red carpet appearance.

When asked about her diet, Rosie Huntington-Whiteley told Harper’s Bazaar:

Staying hydrated is important to me, as it gives me healthy skin, and also reduces hunger pangs. Water is the drug of gods.

It may sound counter-intuitive that drinking more water means being less bloated. But, if your body’s cells are always getting the water they need, they won’t have a reason to hold onto any excess water. When you’re going through (even minor) stages of dehydration, your body is forced into bloating to retain what water it has. Rosie told Harper’s Bazaar her diet starts:

As soon as a I wake up, I try and drink a liter of water. I often find that after a night’s sleep, you’re dehydrated, and it’s a really easy thing to do, To get everything moving the way it should be.

The Rosie Huntington-Whiteley diet plan starts with breakfast, the most important part of her diet. She strongly believes that a proper diet plan involves protein and green juice (for healthy carbohydrates) in the morning. 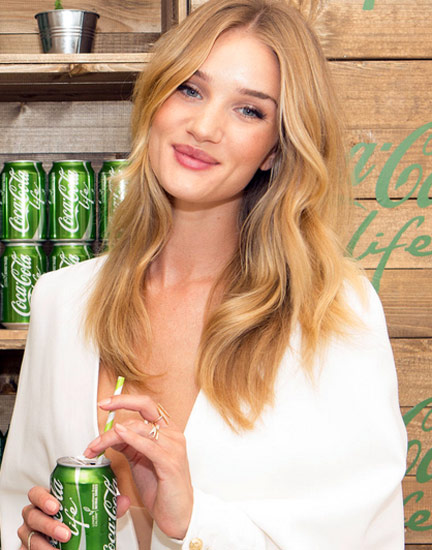 Breakfast is important to set me up for the day. I need a proper food in the morning so I usually have boiled or scrambled eggs with spinach, or Sprouts on Toast, and almost Always a green juice.

Rosie Huntington-Whiteley understands that it’s easier to eat healthy at home. She always cooks basic, clean lunches and dinners for herself while at home. But, she understands that this becomes much harder when you’re out with friends or on the road, saying:

When I’m at home I try and cook very clean, very basic foods. When I’m out, I’ll enjoy myself. But, there are ways to make healthy choices. There’s always fish, chicken and salad.

If I have a lingerie shoot or a red carpet event coming up, I might cut out carbs, watch my salt and sugar intake and even drink more water a few days before.

Green smoothies are at the heart of Rosie Huntington-Whiteley’s diet. She uses a Vitamix to make them, and says the top-of-the-line blender changed her life. 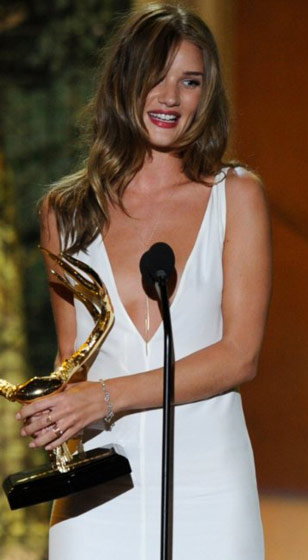 Rosie says the recipe she uses for her green smoothies consists of:

Rosie Huntington-Whiteley knows that incorporating green smoothies into one’s diet can be hard. But, they’re a great source of vitamins for your health, antioxidants for your skin, and energy that lasts all day long.

A year ago, if someone told me i was going to drink a green smoothie, I would have laughed! Then, I was in need of some pep. I knocked back a smoothie and boom…Instant Energy!

I try and do a lot of my supplements in my smoothies. If I don’t have time for breakfast in the morning, I’ll make a smoothie. Bananas, fruit a bit of almond butter, to make it tasty. Then, I’ll throw my flax oil and coconut oil in.

I’m a big foodie, I love food. So, I try not to give myself any restrictions. I eat a lot of salads. I’ve recently cut out a lot of red meat.

Rosie says there wasn’t a specific reason she cut red meat out of her diet, but that it was more of just an experiment. And, her experiment seems to have worked as she says:

Since I cut red meat out, I have noticed how much lighter and better I feel. I’ll have fish or chicken, instead.

When asked if she still eats meat, Rosie Huntington-Whiteley says she does on a rare occasion. But, she feels much better when eating vegan food for lunch & dinner. RHW goes on to say that while she sticks to healthy food, she sometimes feels the need for a carbohydrate splurge:

At lunch and dinner, it’s about a piece of protein, white fish, turkey, chicken, and lots of vegetables. Pretty simple. But, then sometimes I’ll go out and eat a lot of roasted potatoes. It’s all about balance! 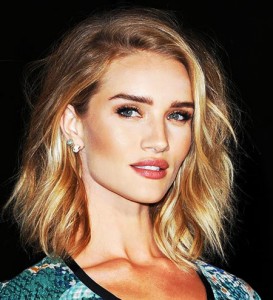 How about anyone who wants to know how to eat to have a body like Rosie Huntington-Whiteley’s?

Looking for more Celebrity Workouts For Women? Get The Best Female Workouts Here!