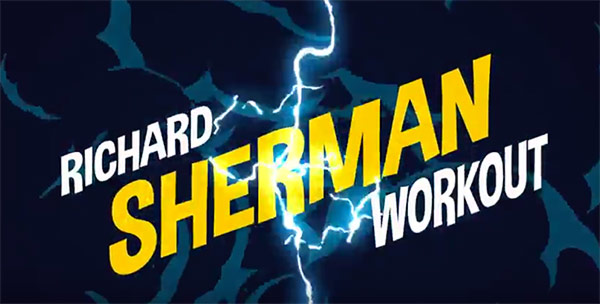 The Richard Sherman workout transforms him into the best defensive back he can be. The cornerback says there are three drills central to Legion of Boom training. The Seattle Seahawks workouts focus on amplifying the DB’s footwork, acceleration, conditioning and explosiveness. These abilities help the 6’3″ 195-pound cornerback to be in the right place at the right time.

Richard Sherman says his motivation, to become the best, stems from wanting to improve each day. He explains his work ethic:

The more you want to improve, The more you have a drive, the will to make it to this level, the more you’ll push yourself. 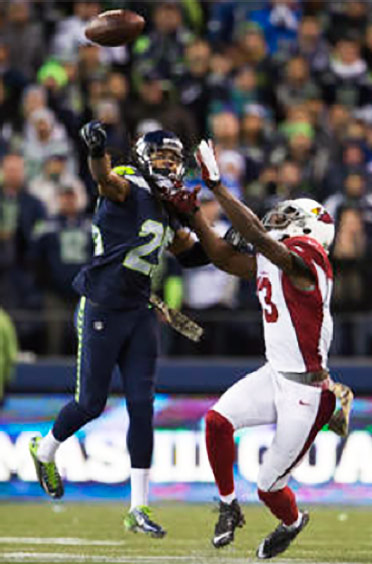 Richard Sherman says he starts his workouts with the Cone Break & Drive. In this drill, the focus is on your footwork. This drill especially helps you with your backpedaling and gaining acceleration. Backpedaling and driving on the football are the 2 skills a young cornerback has to be able to master.

As a cornerback in the NFL, you to be able to see everything around you. Richard Sherman says this drill helps with that anticipation. Plus, you need to be ready and able to break at any time. Being able to break and drive on the football is what helps Richard Sherman get interceptions and break up plays. He says the drill allows him to:

Work on anticipation and awareness. You see the cone out of your peripheral, break and drive. It’s good, because as a corner, you have to be able to anticipate everything around you. You have to be ready to break at any time.

Richard Sherman says Hill Sprints help him with conditioning, especially during the off-season. They help simulate what he’ll be doing as a defensive back in a game. He says to do 10 hills with 15 pound weight vest. Take a rest after the first five. Then, do five more.

Sherman’s trainer says get the athlete to focus on “driving their arms and knees aggressively” while running hill sprints. There are many other ways to build speed. For example, using bands, treadmills, etc. But, hills make it real simple. Richard Sherman talks about the workout, saying:

Not fancy. Anybody can find a hill, so just do it. Make sure you run with good form. You don’t want to over stride and pull your hamstring. So, you want to keep your toes and shins at a nice angle, and just push through. 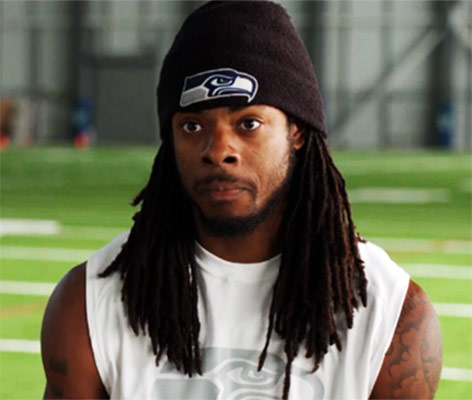 Richard Sherman’s Explosive Jump Drill helps him get back into the right position. With proper footwork, a DB can blanket a wide receiver. But, even the best DB is going to get stuck out of position from time to time. So, Sherman works on explosiveness, and quick reaction times, to get back where he needs to be.

You can be put in a lot of positions on the field, and you’ve got to get out of it. So, this will help with that.

Sherman says the Explosive Jump Drill is similar to running stadiums, and doing quick steps with a weighted vest. So, you can substitute stadium workouts if you don’t have access to this exercise. Richard Sherman says:

It’s about explosion. I’m exploding out and it’s pulling me back in. it’s about how quick you can get back off the ground, after you’ve landed. It’s not about how high you can jump, but working on your explosion, your quickness and your foot reaction speed.

Here’s a look at Richard Sherman helping a prospective defensive back:

Dedication comes from self motivation. You always have to have a goal in mind. My goals are to win, and will always be to win.

The Richard Sherman workout is all about doing what it takes to put himself in a position to win.