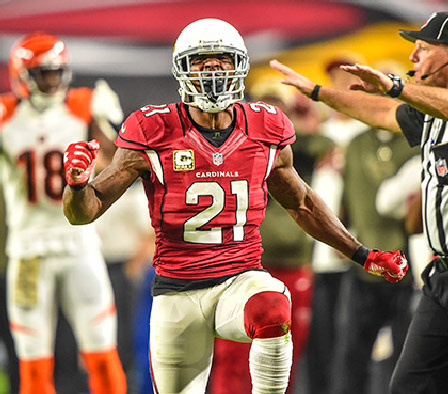 Patrick Peterson’s workout centers on developing his footwork. Playing for the Arizona Cardinals, Patrick Peterson’s playing style is all about wanting to dominate on the football field. As a defensive back, Peterson says the key to winning each battle is to keep the wide receiver in front of him. To do so, he focuses on swinging his hips, and moving his and feet in the right direction.

Ultimately, with the right footwork and hand action, Peterson says the goal is to get the receiver to go where Peterson wants him to go. But, this is no easy feat. Patrick Peterson’s hands and feet have to be perfect. So, he constantly works toward this perfection.

His workout is full of drills that empower him to attack the wide receiver. Besides these drills, Patrick Peterson talks about his technique, while playing as a defensive back for the Arizona Cardinals. He explains how to dominate a wide receiver, by getting him to go where you want him to go.

I focus on staying low, making sure my eyes are low, pointed at the midpoint of the receiver’s body I make sure my hand placement is always perfect because I don’t want to hit a receiver on the outside of the shoulder. Because, he could lock my hand down. I want to make sure I get in at the pecs, so I can control the receiver where I want to go.

All the work Patrick Peterson does helps keep him in position. He says this is crucial, in order to keep the wide receiver of him at all times. He won’t be beat. Patrick Peterson talks about his workout, explaining that:

Receivers are coming at us full speed. We’re backpedaling.  We have to have the ability to have nice, flowing hips. DB’s need to be able to open up their hips quickly. We need the ability to utilize change of direction, in order to keep the receiver in front of us.

Patrick Peterson’s workout typically starts with lateral hops to get his feet moving. Peterson uses a “mini-hurdle” to do this drill. But, any small, flexible object should do. The key is to avoid injury. Also, Patrick Peterson uses a workout vest to make the drill more of a challenge. This makes things easier when he’s on the field in pads. 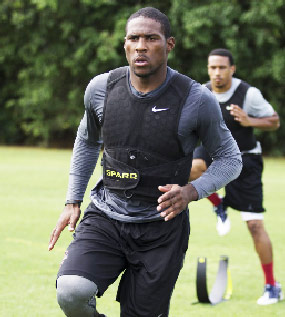 To do this drill, his coach says:

Focus on changing direction laterally, then making a break vertically. At the end, Imagine yourself following a route the receiver would go.

The Cone Drill helps Peterson stabilize the receiver at the line of scrimmage. By punching the receiver in his pecs, Peterson is able to control where the wide receiver goes. They use the cone drill to simulate this technique. 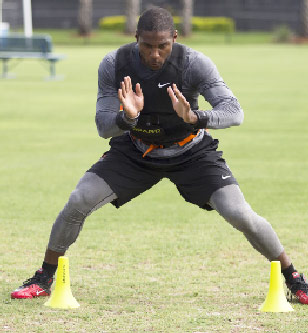 Peterson’s coach explains the mentality of the drill is to initially jam the receiver. The defensive back wants to get the wide receiver off course. By going where you want them to, you gain the advantage. Then, be ready for any change of movement as the route gets deeper. During the cone drill, finish by turning and running at the last cone.

Punch, then release at the end.

Patrick Peterson and his teammates on the Arizona Cardinals use the Sit Down Squat. This drill helps cornerbacks with their backpedaling technique. The difficulty is to stay under control, and maintain posture as you move backwards. Balance is a key skill gained from this exercise. You also learn to avoid injury by maintaining proper form. 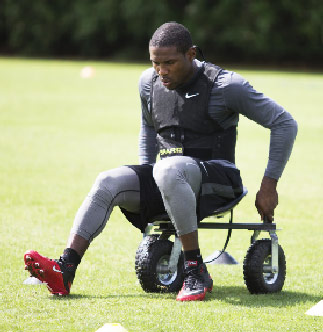 Is a nice little drill to help a cornerback maintain his posture while he’s back making sure hes staying low with good knee and ankle bend to stay in front of the receiver. Everything works together as a family, the core, the quad, the feet. You have to make sure everything is up to par, so you can be an elite athlete and cornerback.

Patrick Peterson’s technique is about controlling the receiver by being more physical. He talks about his technique as a defensive back, and what he has to do to stay in control. To be a reliable shutdown corner in the NFL, Patrick Peterson says:

It’s important to be physical at the line of scrimmage because it can throw off the timing between the receiver and the quarterback. The more physical you are at the point of attack, the better off you’ll be deeper into the route.

Patrick Peterson does these workout drills and training techniques with his fellow teammates. They include Tyrann Mathieu (see the Tyrann Mathieu Workout), Justin Bethel, Deone Bucannon, Rashad Johnson, Robert Nelson, Jerrad Powers and Tony Jefferson. The more they can practice knocking a receiver off his route, the more of an elite NFL defense they become.