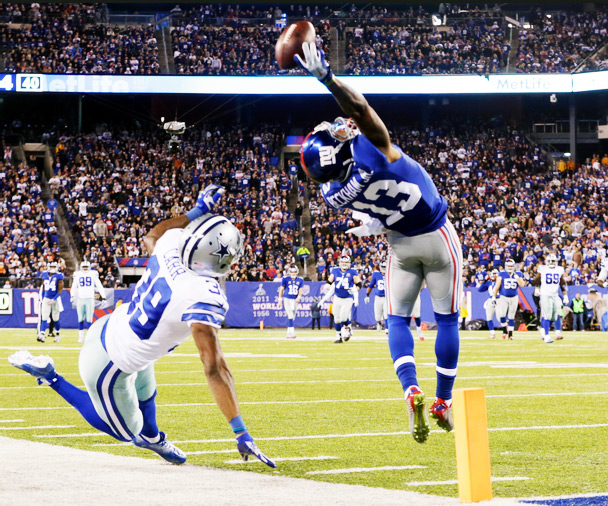 Odell Beckham’s workout shows there’s a lot of work behind his one-handed catches. As a wide receiver for the New York Giants, Odell Beckham Jr. trains his entire body for the NFL season. He uses a lot of drills to work his lower body, especially the the hips and core.

Odell Beckham also says exercises for his upper body are important. Here, the primary focus is on arms and shoulders. If Odell doesn’t build up enough lower body strength, he’s never going to be in position to make a stellar catch. If he can’t fight off defenders, he’ll never get to where the football is going.

Odell Beckham Jr.’s first exercise is the Split Squat Parallel Pass. It works the core and hips. Stay low to make sure your hips stay square. When you pass the ball, try not to move your hips in that direction. Keep them parallel to the direction you’re throwing the ball.

Odell Beckham’s trainer, Denis Logan, says this exercise is great for rotational strength, hip power and core strength. It also helps Odell Beckham to trust his lead leg while making cuts. To strengthen your quads with this exercise, make sure to put the weight on your front foot. 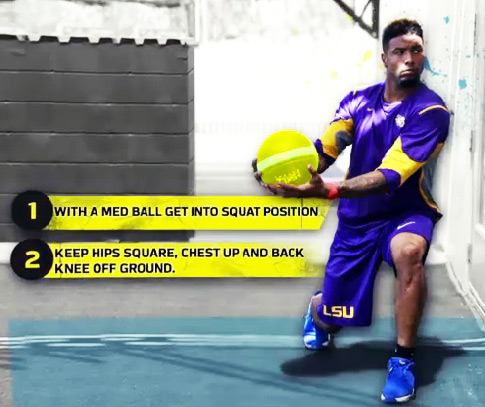 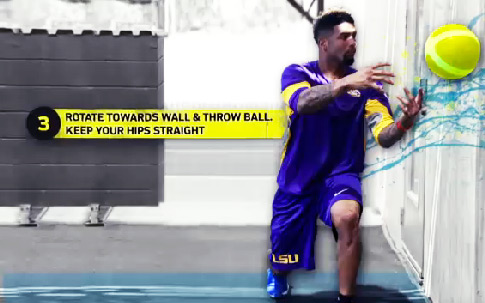 It puts you into a position to make breaks. You want your shoulders over your toes. You use your quads to make breaks. This exercise allows you to use your hands, to improve eye coordination while catching the ball.

Odell Beckham Jr. uses the Single Leg Speed Squat for explosiveness and speed. It’s a single leg exercise in order to balance out any leg that’s stronger than the other. They use the Kaiser machine to help him accelerate through his breaks as fast as possible.

The exercise works Odell Beckham’s quads and hamstrings. It helps him with explosion out of his break. Drive your knees up high, and repeat. Odell Beckham says:

Being a wide receiver any time you make a cut, it’s on one leg. Having the proper quad strength is really crucial for me, getting out of my breaks. 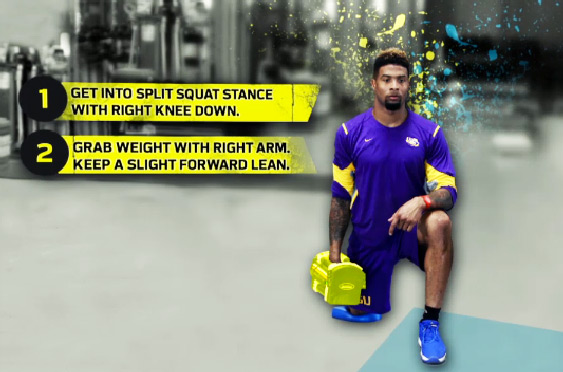 This exercise helps Odell Beckham with all the hand-fighting a wide receiver experiences, especially at the line of scrimmage. The Curl to Overhead Press exercise also builds his shoulders. NFL football players have to have healthy shoulders to fight off opposing players. When Odell Beckham Jr. made his famous one-handed catch, you can see how he landed: 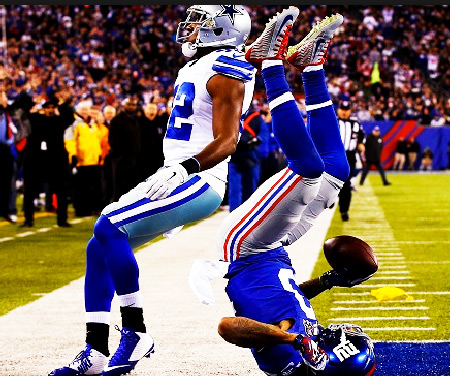 This exercise allows you to fully use your core and maintain strength. If you get pushed or jammed up, and they get a hold of you, it allows you to get back in position. It also gives you the upper body strength to fight off those defenders.

Odell Beckham’s workout varies by whether he’s in the NFL season or not. During the season, he works with his Giants teammates, trainers and coaches. His teammates include wide receivers Dwayne Harris, Will Tye, Myles White, Reuben Randle, Hakeem Nicks and Geremy Davis. 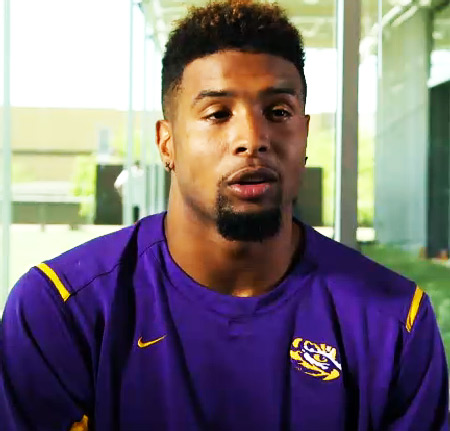 In the off-season, Odell Beckham works with Denis Logan at EXOS. This is a pro facility in Arizona, formerly known as “Athletes Performance.” Many pro players work out here, as the collective bargaining agreement prevents them from organized activity in the off-season.

To get in football shape, you need to do a lot of short sprints. They don’t have to be long. You just have to get a lot of reps in.

About the 4th quarter, he was asked if he does anything to train for it:

The 4th quarter isn’t something I train for it specifically, it’s more mental. By visualizing everything before it happens, I’m ready for it when I see it in-game.

When asked about his keys to success and making those one-handed catches, Odell Beckham Jr. says:

Taking care of my body, plus the intensity I bring to the game. Those are the secret to my success.

Despite playing only 12 games, Odell Beckham Jr. had the greatest stats of any rookie wide receiver in NFL history. Through 2 years, Odell has 169 receptions, 2459 yards and 22 touchdowns.