The Liam Hemsworth Hunger Games diet was intense, because Liam had to starve himself to fit the role. He often found himself miserable and upset. Due to the lack of calories, he lost weight, but at a price. The stars of the “Hunger Games” had to look the shape of their roles. Liam says:

Gale is providing for himself and his family. He’s not well-fed at all. It was tough, because I’m an eater. If I have one addiction in life, it’s probably food. [It put me] in a really bad mood, with a short attention span and a short fuse.

The typical Liam Hemsworth diet was Paleo based, and includes:

Chicken was the major fuel that the actors used to stay lean. Co-star Josh Hutcherson, who was also on the same diet, remarked after filming:

You know, I used to like chicken. But after months and months of virtually having to eat little else, I really think I won’t be able to even look at a chicken breast for quite a while

Liam had to lose some weight before the movie, after all, his brother Chris Hemsworth reminded him that he was filming the “Hunger Games not the Eating Games.” Trainer Barry Landreth, Liam’s trainer for the Hunger Games, says:

Diet was the biggest thing. You can train with weight, but you can blow it in 30 seconds with food. It’s about mind over matter when it comes to losing weight.

When it came to start shooting for “The Hunger Games,” Liam took drastic measures:

When we started shooting, I would have one meal a day. It wasn’t that it was even healthy. It was whatever I could get, and not a lot of it.

I was training five or six days a week, and eating a lot less. When we started shooting, I wasn’t training as much, but I was eating only very minimally. 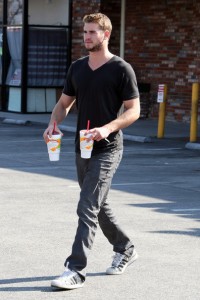 For The Expendables 2, the Liam Hemsworth diet was the exact opposite. In order to make his presence known with Jean-Claude Van Damme, Sylvester Stallone, Bruce Willis, Arnold Schwarzenegger, and Jason Statham in the room, he bulked up. This reminded him of when he was young:

We used to wrap towels around our hands and use them as clubs for sparring matches in the family room.

For the diet, they found it hard to find beef in Bulgaria. So they stuck to:

Here’s a video illustrating what it was like behind the scenes, working out for the Hunger Games:

Here is Liam Hemsworth talking about “The Hunger Games”:

Here is Liam Hemsworth talking about growing up with his brothers, including Chris Hemsworth (Thor):

Sources for the Liam Hemsworth Workout Routine for “The Hunger Games” include: 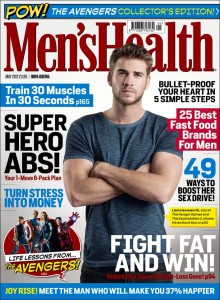 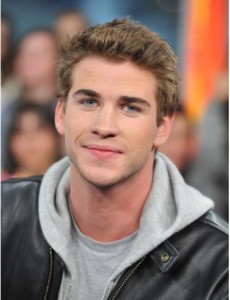 Know anyone who wants to look like Liam Hemsworth? Or anyone that could benefit from his workout?

Please Share The Liam Hemsworth Workout With Them below.