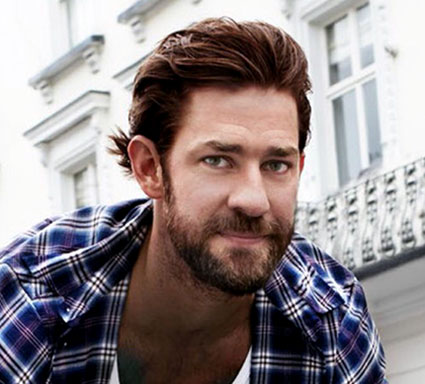 John Krasinski gets Navy SEAL ripped for his latest movie, 13 Hours: The Secret Soldiers of Bengazi. The goal of his workout is to become a tough, military figure. His current image doesn’t strike fear in many people (except Dwight Schrute). Known as Nice Guy Jim Halpert from The Office, a Navy SEAL character doesn’t immediately fit his profile. So, John Krasinski had to get in shape quickly for his new role.

To get ripped, John Krasinski worked out with trainer Jason Walsh of RISE Nation. Bradley Cooper is another celebrity who works out with Jason Walsh. The result? He was able to gain 25 pounds of muscle in 4 months, and cover the January Issue of Men’s Health: 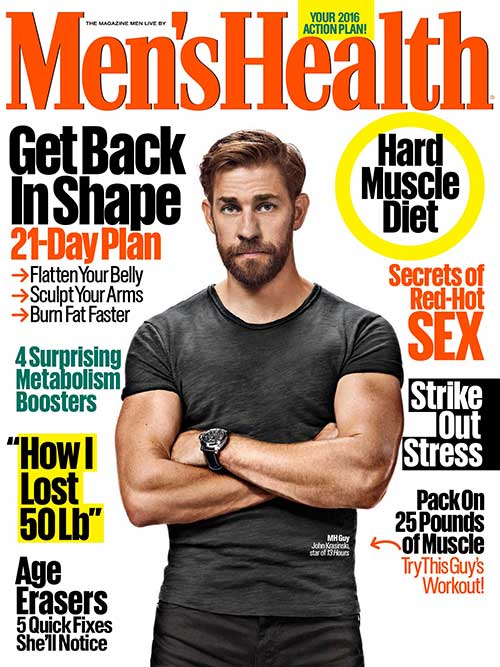 Only having 16 weeks to transform his body, Jim from The Office knew his workout routine was going to be tough. Luckily, he had the weekends off. Also, he was allowed to take one day off during the week.

John Krasinski gave Men’s Health the “jist” of what each workout looked like. It’s a Weights-Abs-Metabolic Routine. Here are the primary exercises John Krasinski used.

The routine uses a pyramid style of lifting. The goal is to go heavier in weight, but do less reps, each week. The aim is to use a heavier starting point the next month. The theory behind the pyramid technique is progressive load. After 4 weeks your body adapts to a heavier load. Being able to lift more, means stronger muscle tissue formation, leading to bigger muscle gains.

Follow up each workout up with a core routine and metabolic activity. Core routines are different sets of abs exercises done each day. Metabolic activity included box jumps, sled pulling, kettlebells, rope pulling and (more below). 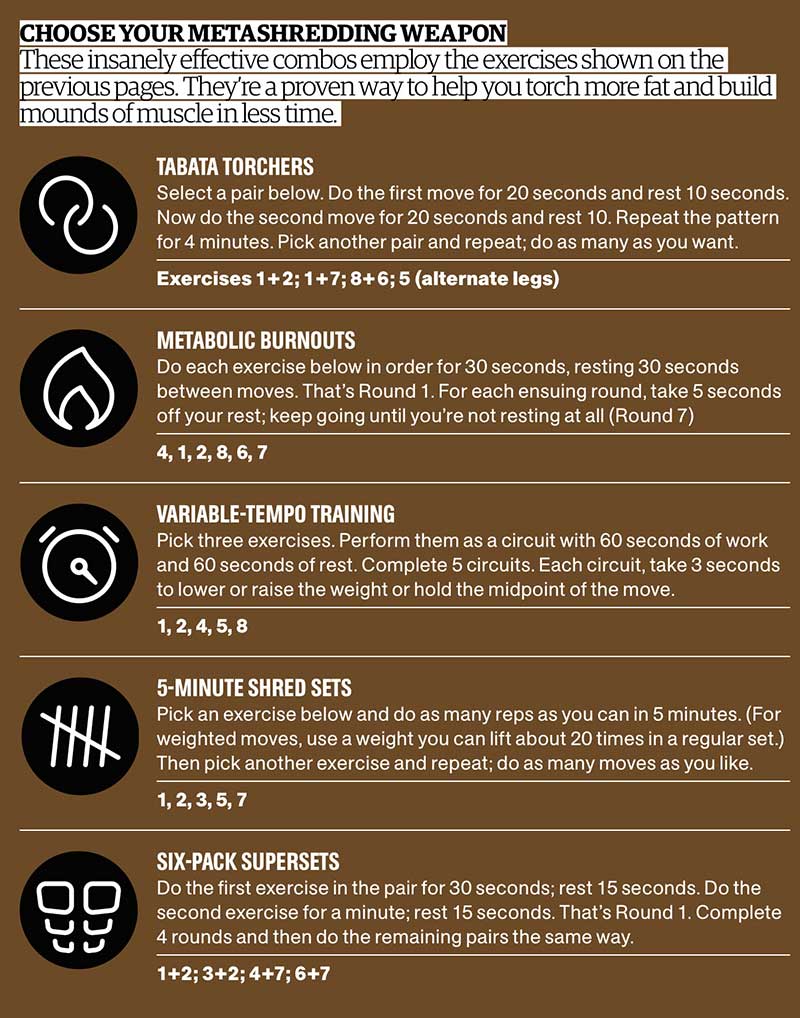 When asked what exercise he hates, John Krasinski says:

One exercise I hate is anything with legs. If your triceps or biceps go, and you can’t lift the shampoo bottle in the shower…that’s funny! But, not being able to sit down at the table…that’s not funny!

It all started when the first words from his trainer, Jason Walsh, who hadn’t seen him in months, said:

Oh My God, what did you do?

Krasinski didn’t have much of a response. In fact, he says:

I didn’t know what I wanted, until Jason told me what it was. I realized the goal was to look like the guys you’d want to saving you if you were in trouble.

Ditching the Jim Halpert character is what he really wanted. He had to become the real-life Navy SEAL Jack Silva. Getting rid of his fictional character’s persona was his workout goal. This meant adhering to a set workout schedule that included a lot of metabolic activity.

Priority One was building up a strong foundation again. We accomplished this the usual way with heavy squats, presses, pulls and rows. 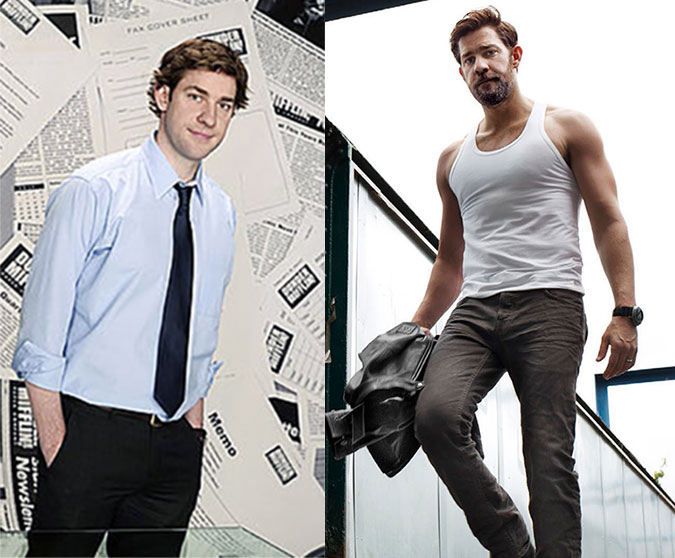 Krasinski has been working out at Rise Nation. A popular gym in Hollywood, many celebrities work out there, especially with trainer Jason Walsh. But just because it was a popular gym, didn’t mean the workout were easy:

I’ve gotta be honest. Those were brutal times. We did tons of metabolic work, dragging sleds and all the stuff I’ve seen NFL players do.

The goal was to pack 25 pounds of muscle on John’s 6’3″ frame. They also had to reduce his body fat. Walsh first measured his body fat at 26%, 5x what would be allowed for a shirtless scene in a movie. For 13 Hours, John got down to almost 5% body fat during the shirtless scenes.

So, how did they accomplish both adding muscle while burning fat?

Building A Solid Base: Key To Adding 25 Pounds

This was the key to Krasinski’s body transformation. Building a solid base of core exercises develops thicker muscle. With enough cardio, this muscle will show over time. Starting out, John says he wasn’t feeling very healthy:

I had shoulder and back pain. in fact, I couldn’t even do one pull-up!

His trainer wanted to build on a solid foundation. To develop dense muscle tissue, Walsh had him do the same 3 exercises at the start of every workout. Pull-ups were one of these high-frequency exercises Krasinski did constantly. Focusing on compound exercises, they built a solid base. Doing a lot of cardio, allowed him to show the 25 pounds he gained for the movie, 13 Hours: The Secret Soldiers of Bengazi.

When asked about the result of doing these repetitive, total-body workout movements John says:

Getting stronger every day is thrilling! To be able to do 20 pull-ups every day…That was amazing.

John started out not being able to do a pull-up. By the end of 4 months, he was able to do 20 each day. Jason Walsh shared a “how-to” with Men’s Health, on how to get better at pull-ups. 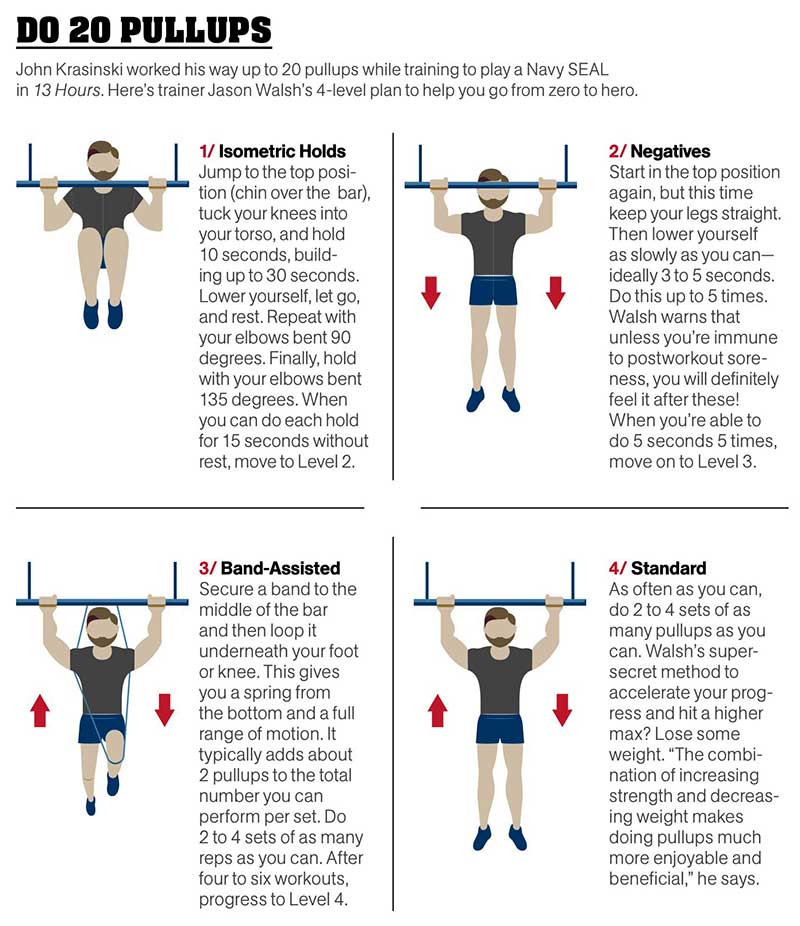 While enjoying a trip to Cabo San Lucas, John Krasinski realized his real life was too much life fictional Jim’s. He was enjoying all-you-can-eat buffets his TV character would probably love. But, in the real world, he wanted to pursue a tougher, more masculine set of roles. Much like Chris Pratt changed his body, John Krasinski wanted to follow suit.

When he found out he got the 13 Hours role, the first thing he did was pig out. Krasinski admits he didn’t have much nutritional knowledge. To gain weight, he tried eating as much Mexican food as he could. John Krasinski talks about his diet:

I went for it. Oh, it’ll all turn into muscle. I didn’t really understand the science.

When Jason Walsh got control of his diet things changed. Krasinski realized what types of food are good for the body. Timing is also important. It’s important to replenish your body with carbs and protein right after a workout. If you don’t, you’re likely to see those gains erased because your body doesn’t have what it needs to grow new muscle tissue. 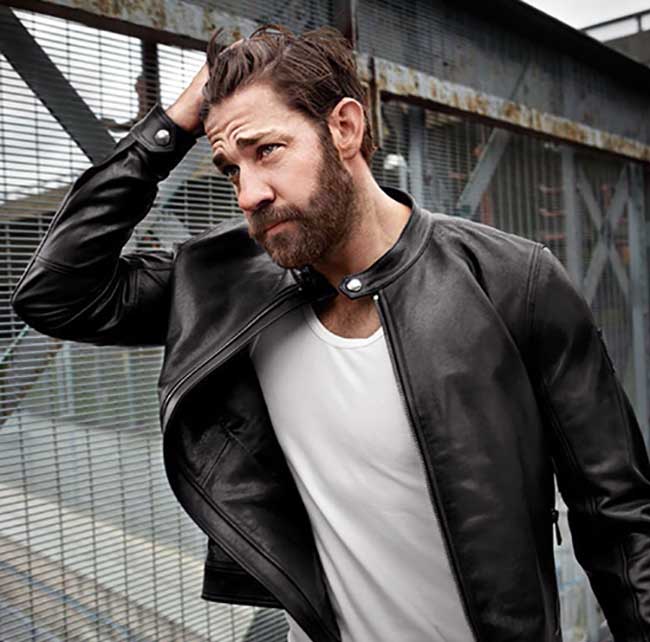 John Krasinski gave some advice when interviewed by Men’s Health. His advice:

One thing you’ve got to when you’re on the Men’s Health Cover: Ask for the ‘Chris Hemsworth Filter.’ Whatever they do to make him look the way he does on the cover…Do it to me!

In a general sense, when asked what to would tell himself to do “10 years ago.”

Don’t be afraid to reach out and grab the life that you want. There’s so many ways you can express yourself.