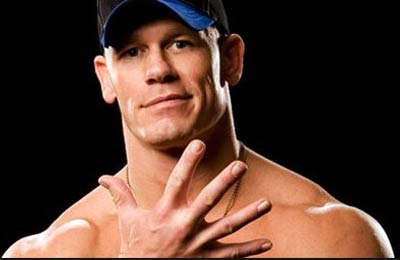 Prev post1 of 2Next
The John Cena workout has supersized his physique for the WWE. The workout gets John Cena jacked by focusing on traditional bodybuilding routines. Cena has found that training heavy has given him the best strength gains. Below are the routines WWE Superstar John Cena has shared with the muscle building workout magazines.

The key to the John Cena Workout is his trainer, Rob McIntyre. Rob McIntyre is a close friend of John Cena’s and has been in the industry a long time. John Cena has used the following routine to win a record 12 WWE championships. 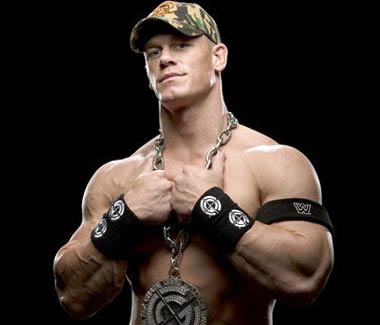 Whether you call him the “Face of WWE,” “Doctor of Thugnamics,” “The Prototype,” “The Cenation Leader,” “The Champ,” “The Chain Gang Soldier,” “Mr. Money in the Bank,” or even “Fruity Pebbles,” one thing remains certain. The John Cena workout transformed him into the monster wrestler that he is today.

The John Cena Workout Routine focuses on lifting heavy weight. John Cena says he warms up before every workout by doing lighter sets of each exercise. These lighter sets are important for his workout routine, because once he gets going, the lifting gets heavy.

You never want to jump into a heavy lifting workout routine. You always want to start light, to activate the muscles that you’re about to put under a lot of strain and duress. Feel free to do lots of sets at lighter weight to start your workout routine.

About the John Cena workout routine, he says:

I try to put a lot more emphasis on warm up and flexibility because my body’s getting a little bit older. But, my routine is longer training sessions, longer rest periods, heavier weight. My fitness goal is to always be stronger.

The John Cena Monday Workout is Chest & Back. He does Chest & Back on the same day to utilize the pushing vs. pulling method that these 2 muscle groups require. John Cena supersets dumbbell rows with incline presses. Then, he supersets pullups with pullovers.

[Click links, above, to see detailed videos/illustrations of each exercise; AMAP = As many as possible.] 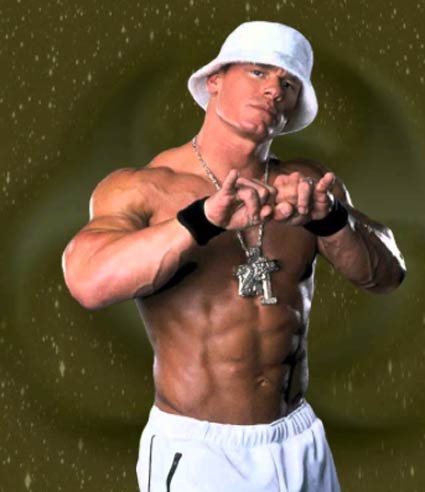 For these chest & back power lifts, make sure to use proper form. Use the heaviest weight you can, while performing the required number of lifts. John Cena says he sometimes goes on a rampage of lifting toward his max. When doing so, he lowers the amount of reps he does on bench press, but increases the weight.

Read more on page 2, and view the chart regarding how Cena says he changes his bench press reps. Also, Cena says he often goes from 4 sets of 8 (on the dumbbell rows/dumbbell press superset), down to 4 sets of 5. Of course, this is done with much heavier weight. The same is true of the pullup/pullover superset, where he may add weight to the pullups and use heavier dumbbells. 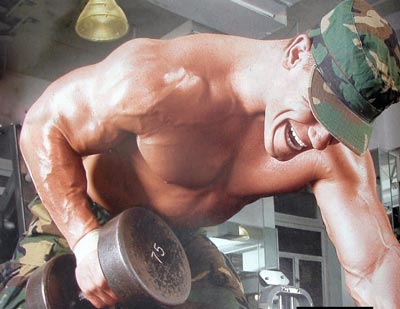 Back in 2005, Cena told Men’s Fitness that he could only max 315. Recently, he was able to max 481 lbs. When asked about it, Cena says he’s doing more Olympic style lifting:

I’m certainly concentrating on the Olympic lifts more than I did in 2004/5 but I guess the term that you guys could use is functional strength. I’m trying to be more functionally strong. The Bench Press or any sort of push movement is something that’s used a lot.

The John Cena Tuesday workout routine focuses on legs. John Cena’s legs workout is useful for when he has to raise people much bigger than him off the ground. Having strong legs and core is crucial for sustaining a long wrestling career.

Note that sometimes John Cena will use a lower rep range for squats and front squats. Instead, he focuses on strength and maxing the weight. Read more about his rep range on page 2. John Cena that the Legs workout is intense, but that you must train to be the best:

This business is about being the best. So, I train to be the best. 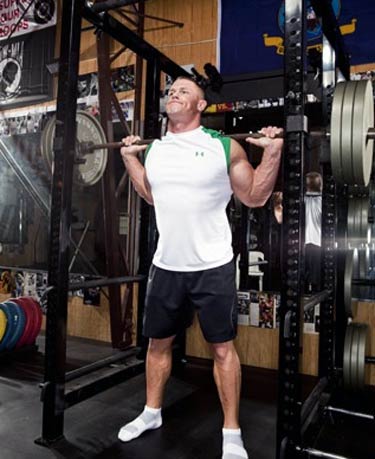 John Cena has said that he saves his Wednesday workout for cardio & abs. These routines change constantly, because both cardio & abs require varied amounts of activation to get the max benefit. For cardio, John Cena varies between low-paced, steady cardio workouts and HIIT-fast paced routines. 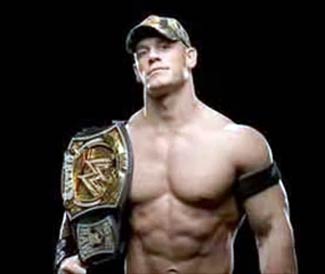 For abs, Cena uses different routines but says that 60 crunches are an important part of every abs routine. He can also be seen doing exercises that combine both cardio and abs, including:

When asked what his life would be without fitness, John Cena says:

Non-existent. I can confidently say that it’s been a part of my life for 25 years now. No matter how busy my life is, no matter how many things I get involved with, I always find time for lifts. That’s the number one priority in my life. I can’t do without it.

The John Cena Thursday workout uses Olympic lifts. Olympic lifts are a great way for athletes to gain tremendous strength. They help athletes with the ability to use their bodyweight to deliver huge changes in force. This helps with wrestling moves like body slams, take downs and signature finishers. See some of John Cena’s finishing moves here. 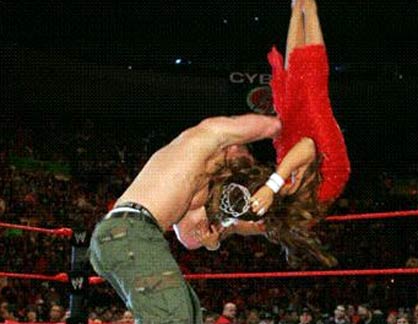 For the Deadlift, Snatch, Clean & Jerk and Power Clean exercises, John Cena is always looking to increase his strength. The John Cena Thursday Workout often veers from the straight sets (above), and uses the following sets and reps (below).

The Olympic lifting workout routine (below) changes every week, in order to challenge John Cena’s strength. As Cena works his way up to his max, he does less reps at higher weight. He makes sure to increase his diet to compensate.

After the Olympic lifts, Cena uses the front squat and shoulder press as finishing moves. You don’t have to go hard, the key is to make sure you’ve gotten a good workout in.  This is especially crucial when he is doing very few reps. He wants to make sure to work his body to the max.

The John Cena Thursday workout may seem like a short workout. But, Cena says that he does multiple sets to warmup (not listed). He does higher reps, with much less weight, to focus on form. Warming up also activates the muscles he is going to use during the Olympic lifts, without straining them right away.

My favorite workout move is…Olympic movements like the snatch and clean & jerk.

Besides the workout listed above, John Cena is always trying to add more Olympic style lifting into his workout routines. His trainer shared this Olympic lifting workout, which they used for a Muscle & Fitness photo shoot with Cesaro (video link on page 2). 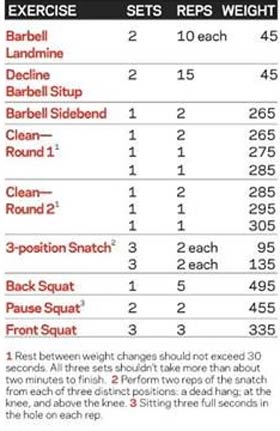 The John Cena Friday workout is for Shoulder & Arms. The workout routine includes a couple supersets. This is where you move from exercise to exercise, without rest. Do the triceps extension, cable backhand and dumbbell curl as a superset. When you’re done with a superset of all 3 exercises, perform another superset. 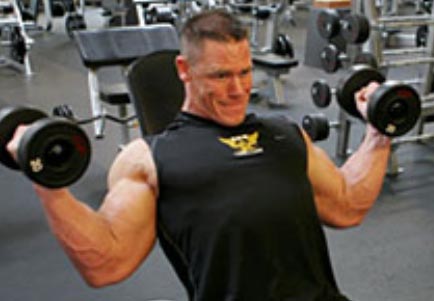 The same is true for the Bradford Press (Shoulders), Reverse Curl (Arms) and Barbell Shrug (Traps). You do a set of all 3 exercises. This allows you to work your shoulders & arms–and traps–all at once.

Although these reps and sets are the ones he reported to Men’s Fitness, John Cena says he often changes things up. He likes to lower the reps, but increase the weight. He will either increase the weight each week, or vary the set/reps back and forth. 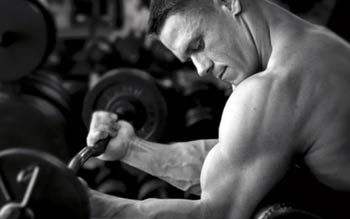