Here, you use a rowing machine to perform interval training. 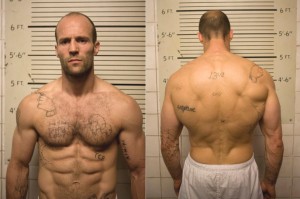 Jason Statham loves to workout with his buddy, Bas Rutten. When they box and train together, Jason Statham says:

He uses punching combinations. He’ll call out ‘one’ a left. Then, ‘two’ a right. Or ‘three’ a left, a right, and a left hook. 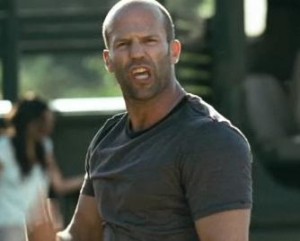 Training is only one piece of the puzzle. Sleep is huge. Stress is huge. Fuel you’re putting in your body is an enormous component.

Jason Statham also likes to do plyometrics exercises. He uses the following exercises when he has the time: 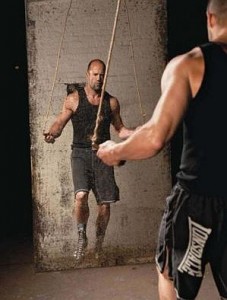 The key to plyometrics is to go hard, and explode through the exercise:

If I’m doing a pushup, I go down slowly and, bang, push up.

As with any workout, you want to change the reps and sets. Increase them as time goes by in order to push yourself into becoming better. Logan Hood, Statham’s trainer, says:

In Jason’s case, I could get him to do a large volume of work, as long as I kept changing the sets and repetitions. He would prefer to do twice as much work, as long as there was a lot of variety.

Jason Statham competed in the 1992 World Championships in diving. His diving past allowed him to build a strong core, which is the foundation of his workouts today. For his abs, Jason Statham used to do 500 situps/other variations a day, while training. These variations included leg lifts, or “pike ups” as he likes to call them. 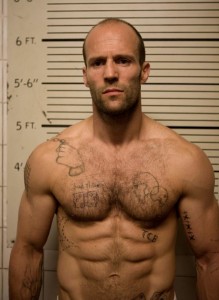 The Jason Statham Expendables 2 workout was built to get him bulked up for the movie. When being cast beside Sylvester Stallone, Jason Statham, Arnold Schwarzenegger, and Randy Coture he had to gain muscle mass. His workout program included much of the Jason Statham workout routine listed above, including:

While filming in Bulgaria, the crew of the Expendables 2 had to use a hotel gym. Still, they were able to get in good workouts when they had time. This included having Sylvester Stallone negotiate with the hotel, so that the gym could stay open at night.