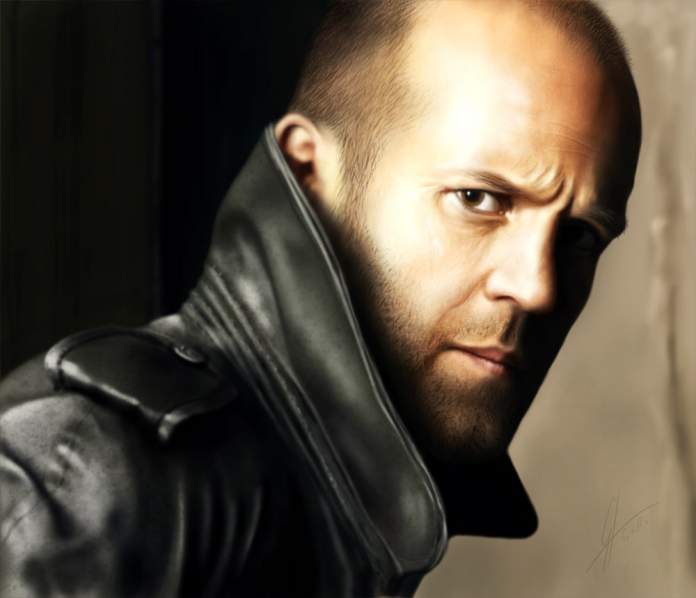 The Jason Statham Workout turns him into the tough guy that is seen on film so often. To get his physique, Jason Statham works out with ex-Navy SEAL Logan Hood. Jason Statham also goes on a very strict, low-sugar diet. He trains to be a tough guy by focusing on high energy, plyometric exercises. He weaves in a ton of circuit-training, combined with explosive strength training exercises. 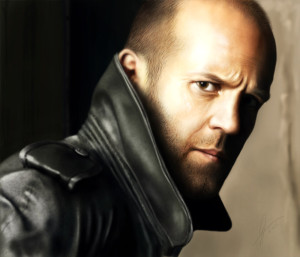 Statham got his break in Lock, Stock, and Two Smoking Barrels because he resembled the street thug necessary for the role. In fact, he was actually working on the black market at the time. From there, he has been seen in movies like: Snatch, The Italian Job, Crank, Transporter, The Expendables, and most recently Parker.

I’m a firm believer in attitude. Some people just don’t have that desire, and they need a good kick in the a$$. Look, you’ve come here to train, let’s f@#$ing train. Your body’s like a piece of dynamite. You can tap it with a pencil all day, but you’ll never make it explode. You hit it once, with a hammer, bang! Get serious, do 40 hard minutes, not an hour and a half of nonsense. it’s so much more rewarding.

Logan Hood, the Ex-Navy SEAL behind the Jason Statham workout routine, started working with Jason Statham in 2008 filming Death Race. Hood is known for helping many celebrity clients. He has worked with people like Zac Efron and Liam Hemsworth. Hood makes sure there is a lot of intensity packed into their workouts. By keeping his clients heart rate up during their workouts, they burn fat and tone muscles at the same time.

Trainer Logan Hood likes to use workouts that bring the muscles close to failure, but then explode plyometrically. For many of his workouts, he likes to use the dynamic/static/dynamic approach. This means that you alternate between explosive movements, and holding the weights locked out, Logan Hood says:

The key is to move as explosively as possible after the hold.

For these exercises, Jason Statham uses the Pyramid style of lifting. Here, you start by doing 1 of each exercise. Then, you go up to 2 reps. Then, 3, 4, 5, 6, and finally to where you do 7 reps of each. Move onto the next exercise after each set. So, the workout routine looks like this: 1-2-3-4-5-6-7 of each exercise. This is a total body workout, as it will work your arms, back abs, and legs. 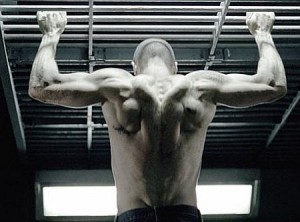 Jason Statham does rowing to warm up and cool down. Logan Hood says that rowing is such a great exercise because:

With each pull of the simulated oars, you’re not only getting a great cardio workout, your engaging about 15 different muscles at once!

Static Circuit: Do each of the following exercises for 4 sets. At the end of each exercise, hold the weight extended for 30 seconds. Then, rest for 10 secs between sets. 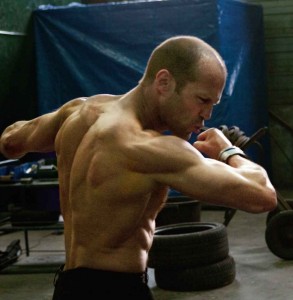 Finish this workout with:

The Jason Statham workout isn’t the typical bodybuilding workout for a reason. He isn’t interested in muscle mass, because he cares more about lean muscle, explosiveness and agility:

Muscle men grow on trees. They can tense their muscles and look good in a mirror. So what? I’m more interested in physical strength that’s going to help me run, jump, twist, punch. 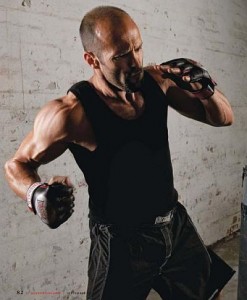 Looking for more Celebrity Workouts For Men? Get The Best Male Workouts Here!
Prev post1 of 3Next