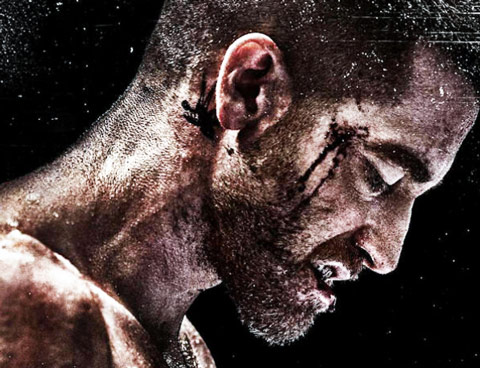 Prev postNext post
The Jake Gyllenhaal “Southpaw” workout transformed his body into a championship boxer. Doing 2,000 sit-ups a day is just one highlight from his boxing workout. Jake decided fully immersing himself into the role was the only way to go. He prepared for Southpaw by committing to an actual boxer’s routine 24/7. 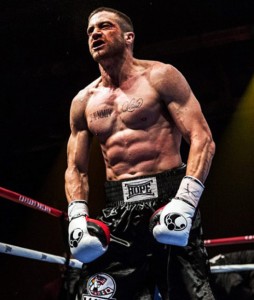 For Gyllenhaal, the role of Billy “The Great Hope” in Southpaw, meant becoming a real life boxer. To play the part well, it also meant finding the right trainer. Jake reached out to boxing coach Terry Claybon. 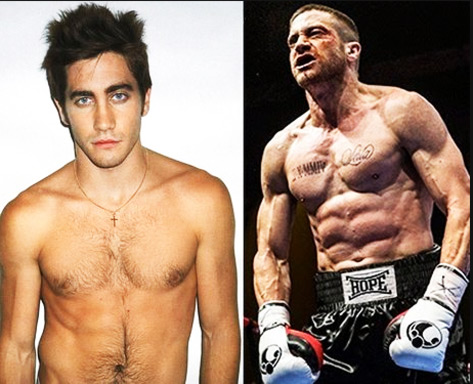 The challenge for both Gyllenhaal and his trainer, was to live each day like an actual boxer preparing for a match, in both mind and body, with an upcoming opponent. 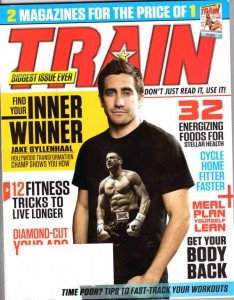 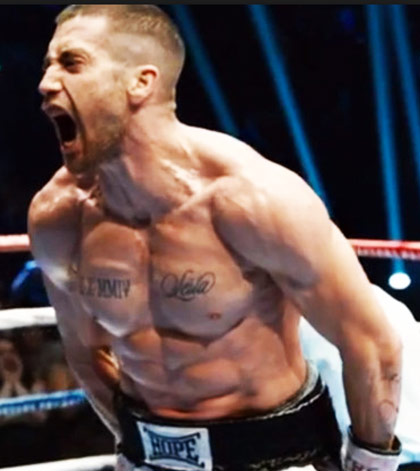 After boxing in the morning, Jake Gyllenhaal told TRAIN Magazine he would do the following bodyweight / core workout:

Note: Jake Gyllenhaal would do this workout as a circuit (2-3 times through). He would do each exercise once, then move onto the next. Gyllenhaal would rest for 1 minute only after completion, then perform the circuit routine again. 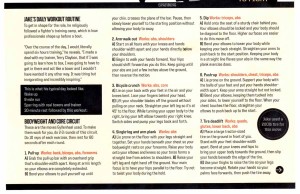 Jake Gyllenhaal’s boxing workout consisted of all the stuff a boxer would do. He shared his afternoon cardio boxing workout with TRAIN Magazine, saying it consists of rounds of:

I did timed rounds of each of the following moves, which would gradually increase as I improved. I was sparring up to 8 round by the end of training. I would do six rounds of the heavy bag, 3-4 rounds of speedball and 4-6 rounds of pads.

Jake would do round of anywhere between 2-5 minutes, depending on his priorities for the day. Gyllenhaal would also do sprints, foot drills and box jumps for lower body strength & conditioning.

When interviewed by Extra for his movie, Southpaw, Gyllenhaal explained the commitment, and how long he trained for the role:

that movie was full-on commitment. I hadn’t really boxed a lot in my life…I just knew that the bar was really high. I trained like a boxer. I trained 5 months straight.

I went into Full training-camp mode. And, I got myself in my mind as actor, in shape to fight.

In addition to the 2 workouts, Jake also made sure to do 1,000 sit-ups every morning when he woke up, and another 1,000 before he went to bed.

Jake Gyllenhaal’s weightlifting workout was done in the afternoon. Instead of being a circuit workout, the focus here is strength. His trainer would vary the rep range, usually staying between 8-12 reps. 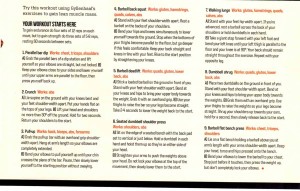 Strength wise it was very compound and bodyweight based. So, there were a lot of dips, pull ups, walking lunges, shrugs, deadlifts, crunches and squats.

To get the whole mentality of becoming a boxer, Jake reached out to Terry Claybon. Gyllenhaal’s boxing mentality was so serious, he even broke up with his girlfriend. 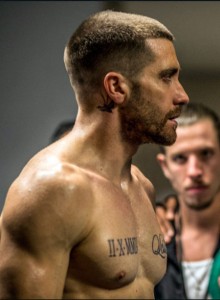 She couldn’t take how focused he was on his role, leaving no time for her. Spending each day as if there was an impending duel with an imaginary opponent, Gyllenhaal’s boxing mentality was clear. He says:

I was sparring and really getting hit. It helped me understand the sacrifice it takes to be a fighter. You can’t play a boxer and just look like a boxer. You have to believe you can exist in that world.

By becoming Billy “The Great Hope,” Jake Gyllenhaal learned much more about boxing than he ever thought he would. Jake was so invested in the role, he wanted to make sure he was doing everything a boxer would.

Southpaw was one hell of a commitment. The whole process was amazing for an actor, to get into the mind and core of this man. I was training twice a day, seven days a week.

I had him training with me twice a day in the boxing ring. Eventually, he did two-a-days in the ring, 7 days a week.

After 2 months, the workouts got pushed to six hours a day, 3-4 hours of boxing, and 2 hours of strength workouts. The training wasn’t easy either. Antoine Fuqua (the director) says the goal they shared was:

Training like a fighter. I had him sparring, really getting hit. I wanted to put him in situations where you could really see what he was made of.

When asked for details about the mental preparation of boxing for the role, Jake Gyllenhaal says:

Literally training, the skills of boxing, for the body and the mind. Two times a day, just learning the skills. As you learn the skills, that just happens in your mind and in your body.

The Jake Gyllenhaal Southpaw workout required the help of an expert to help guide him toward becoming a boxer. Jake found one in his trainer, When asked who is favorite boxer is, Gyllenhaal stated Miguel Cotto.

The “Southpaw” workout helped Jake get a boxer’s body, as well as, to prepare him mentally for the role of Billy “The Great” Hope in Southpaw.

Insane abs are the most noticeable part of Jake Gyllenhaal’s body. You can see how ripped his abs are in the movie, Southpaw. The secret to getting Jake Gyllenhaal’s abs is doing 2,000 sit-ups a day. A clean diet is essential, as well. 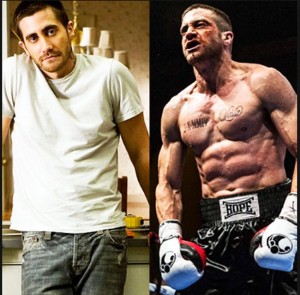 Gyllenhaal says the key to his workout routine comes from approaching everything gradually. By finding what his body was capable of doing, he progressed a bit each day. Eventually, Gyllenhaal was able to work up to those 2,000 sit-ups.

Jake Gyllenhaal’s weight loss was needed for Nightcrawler. This was the movie right before Southpaw, so it was a tough challenge to change weight so quickly. Gyllenhaal had to lose 30 pounds for his role in the movie Nightcrawler. 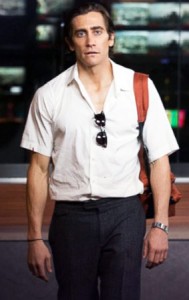 Gyllenhaal’s normal bodyweight is 180 pounds. So, Jake had to drop to 150 lbs. for Nightcrawler. He lost the weight by running 15 miles a day.

Gyllenhaal’s Nightcrawler diet was all about eating as few calories as possible. Yoyo-ing from weight loss in one movie, to weight gain in the next, Gyllenhaal has faced tough mental battles over food.

Although the preparation for Nightcrawler was completely different, his will had to be the same. Having a sharp mental focus on what he was eating was the key to Gyllenhaal’s body transformations.

Jake Gyllenhaal’s weight loss came from running and a restrictive calorie diet. To lose 30 pounds, he had to eat as little as possible. His producer told Variety:

On some nights, he wouldn’t eat at all. Or, he’d nibble on a small piece of kale or chicken.

It was after this mental and physical preparation, that he took on the role of Billy Hope in Southpaw.

Jake Gyllenhaal’s diet for Southpaw mirrored his workout by matching carbs/protein with the type of exercise he was doing. When he was boxing, he ate more carbohydrates for energy. Weight lifting meant the need more protein afterwards. 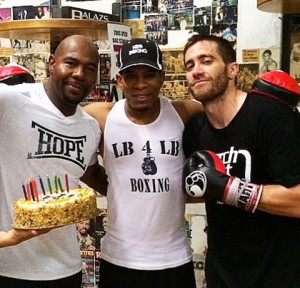 My look really came from training in the ring and my diet. Nutritionally, it was 6-7 meals a day, eating every 3 hours or so. Often, it was to add fuel for my next session or to get my energy back up from the previous session.

He goes on to talk about the staples of his diet, saying he had to eat very clean to stay lean:

Asked to boil down his diet in a few words, Gyllenhaal says:

It was a lot of salads, vegetables and lean meat. I would drink plenty of water throughout the day as well…Nothing Fried and everything was as natural as possible.

Post-workout, Gyllenhaal’s diet focused on protein. He realizes the need to get protein into his body after each workout. Otherwise, he runs the risk of losing his hard-earned muscles.

Jake Gyllenhaal would have a protein shake after every workout. When asked about supplements, Gyllenhaal simply says:

In terms of supplements, there was vitamin D3 and Vitamin C, and then there was protein shakes.

For Southpaw, Gyllenhaal had a weight gain goal of 15 pounds. This was right after losing the 30 pounds for Nightcrawler. Weighing in at 150 lbs. before filming, he got up to 165 lbs.

The tough part was having to do it while running 8 miles a day, sparring and hitting punching bags for hours on end. Also, it had to be muscle weight to look the part. Since Jake had to put on muscle, not fat, the transition was tougher. 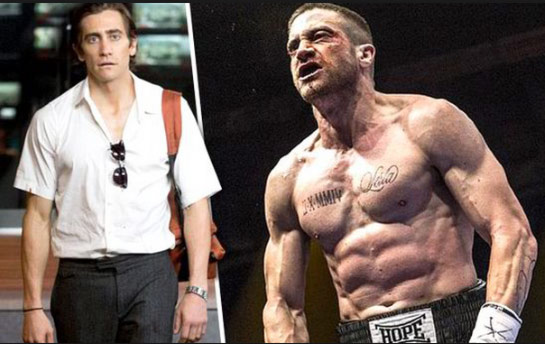 What do you think of the Jake Gyllenhaal workout? What about the shape he was in for his role as Billy Hope in Southpaw? 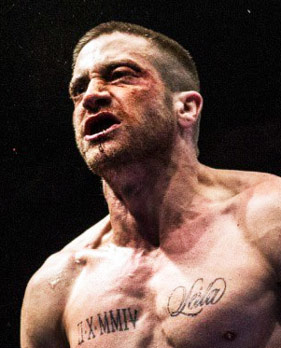