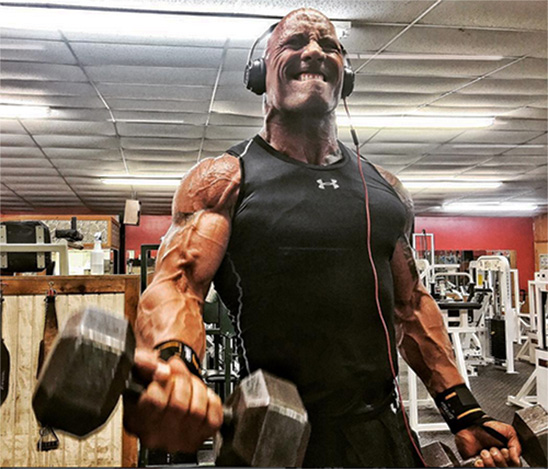 Get Massive Arms with The Rock’s bicep and tricep workout. The Rock believes the key to getting bigger arms is doing lots of repetitions. This allows the blood to pool in your biceps and triceps. When the blood pools your body is able to repair after strength training and get stronger. They call this massive arm swelling…The PUMP! 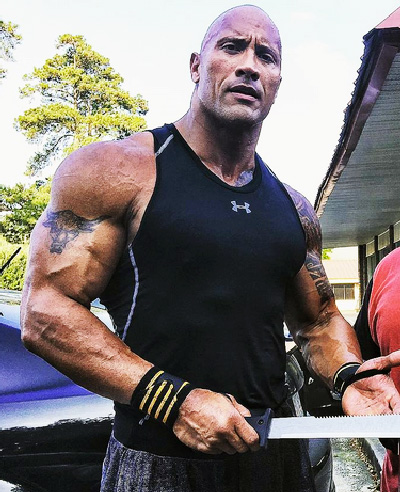 The Rock’s Bicep & Tricep workout starts with a few warm-up sets. He then transitions into doing 3 x of 8-12 reps of each exercise. Do at least 8 reps. Get closer to 12 if you find it pretty easy. The Rock Arms Workout Routine is about doing lots of reps to “Get the Pump.” It’s how Dwayne Johnson gets huge arms.

So, here is the Dwayne ‘The Rock’ Johnson’s Bicep and Tricep Workout:

Same Workout As Above – Click Links For Details & Explanations

Note: For #7, time permitting do 3 sets of both. If you’re limited on time, or relatively new to working out alternate each workout. Each exercise works a slightly different part of your tricep muscle.

How to Get Huge Arms

The Rock sometimes switches things up to work different areas of his arms. His Instagram account reveals some of these arms exercise variations. Here are some of the bicep & tricep alternatives The Rock uses:

The Rock showed Instagram he gets massive arms by replacing Hammer Curls with Reverse Curls. Both variations maximize the width of your entire biceps muscle. But, reverse curls do this by taking the pressure off your main biceps muscle. Instead, they work many of the support/supplementary areas. 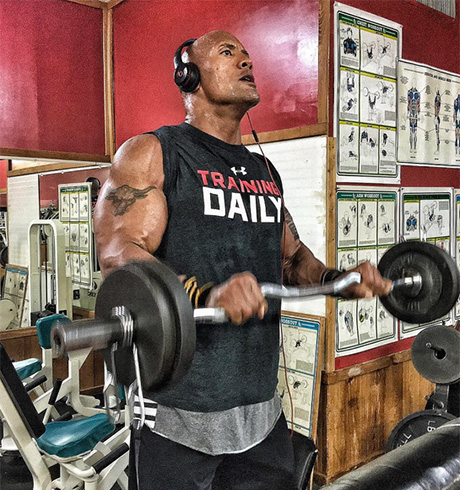 Working different angles and variations helps work the lesser used muscles. This helps you get bigger arms in a comprehensive fashion.

In the Hercules Workout The Rock uses here, Johnson uses Spider Curls. These were an especially famous bodybuilding exercise in the 80’s. They’re less popular today, but still worth a try when you’ve got the pump. To get massive arms, the more variations and exercises the better.

No surprise here. Instead of doing seated bicep curls, The Rock switches them up with the standing version. This means you would want to start your workout with a few sets of very light, seated curls. 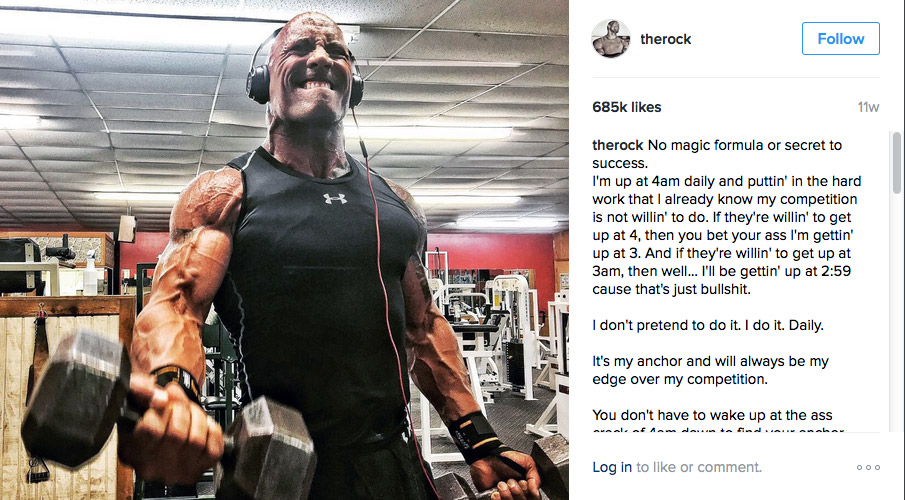 Here, The Rock shows he sometimes uses Lying Tricep Extensions instead of Overhead Tricep Extensions. There isn’t much difference, other than the benefit of lifting from various angles. Different angles work slightly different areas of each muscle. This helps you get bigger over time. 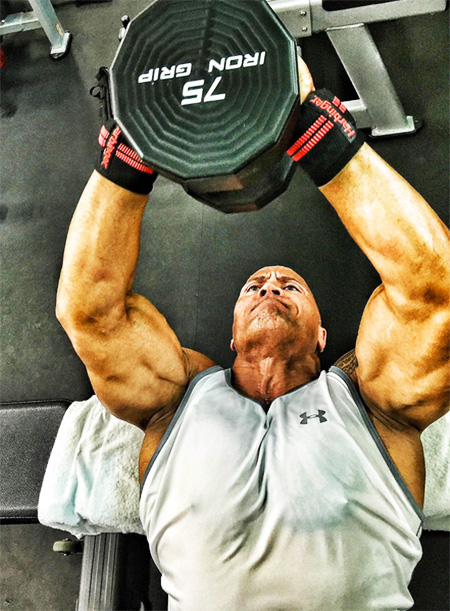 Finally, The Rock uses Cable Overhead Tricep Extensions. This replaces the Skull Crushers used in his traditional workout. Cables offer you a longer range of motion, helping you elongate your triceps muscle. 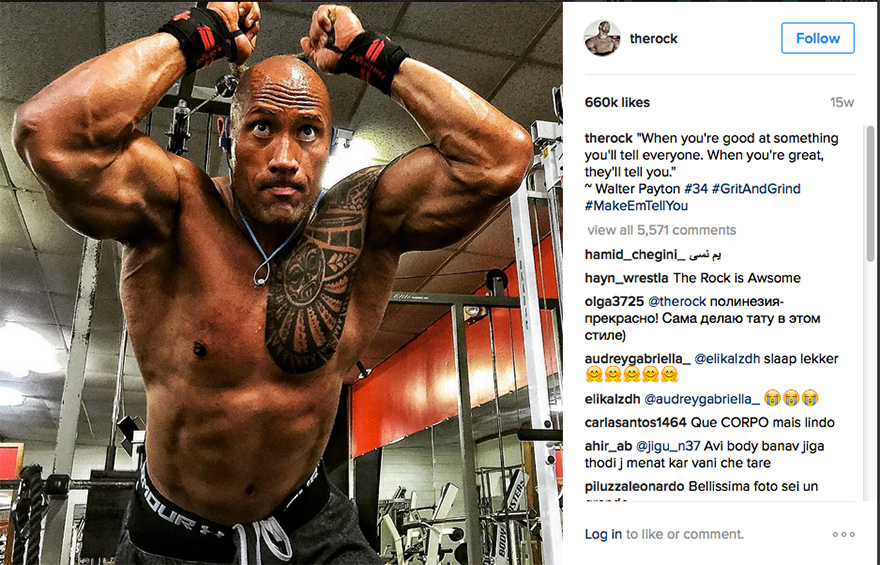 When you’re good at something, you’ll tell everyone. When you’re great, they’ll tell you.

Secret To Getting Huge Arms

The secret to getting huge arms is doing a lot of isolation movements on ‘Arms’ Day. Dwayne Johnson uses George Farrah’s method of high reps for arms. This is where you start out with one set at much lighter weight. Although not included in the infographic (for the sake of simplicity), The Rock will actually do a warmup set for each arms exercise.

So, to get huge arms like The Rock, you want to “Get the Pump” in your biceps and triceps:

Add an extra set to each exercise. Make it much lighter than normal. To “Get the Pump” do 15 reps, and feel the blood enter your biceps/triceps. Then, do 3 more sets in the 8-12 rep range. If you don’t have time to do this for every arms exercise, at least do it for the 1st bicep and 1st tricep exercises of each workout routine.

The Rock’s trainer, George Farah, says this is secret behind getting hugs arms. The idea behind this method is you don’t want to tire your arms out quickly. Your biceps and triceps are small muscles. The mistake is to go heavy when lifting arms. When you do this mistake (lifting too heavy), your small arm muscles give out too quick.

So, the key to getting massive arms lies in getting as much blood as you can to that region. The light set primes your body. Getting the blood there quickly, allows you to maximize your arms workout. Just because you start light, doesn’t mean you take it easy.

Go for intensity, maintain the pump. You should feel the burn. But, if you feel you’re much weaker after the first couple exercises, you may be lifting too heavy.

Posing for a Fast & Furious 8 promo, The Rock talks about his body on Instagram, saying:

Freight trains don’t fit in muscle cars. So they express their dominance with a warm and inviting smile. 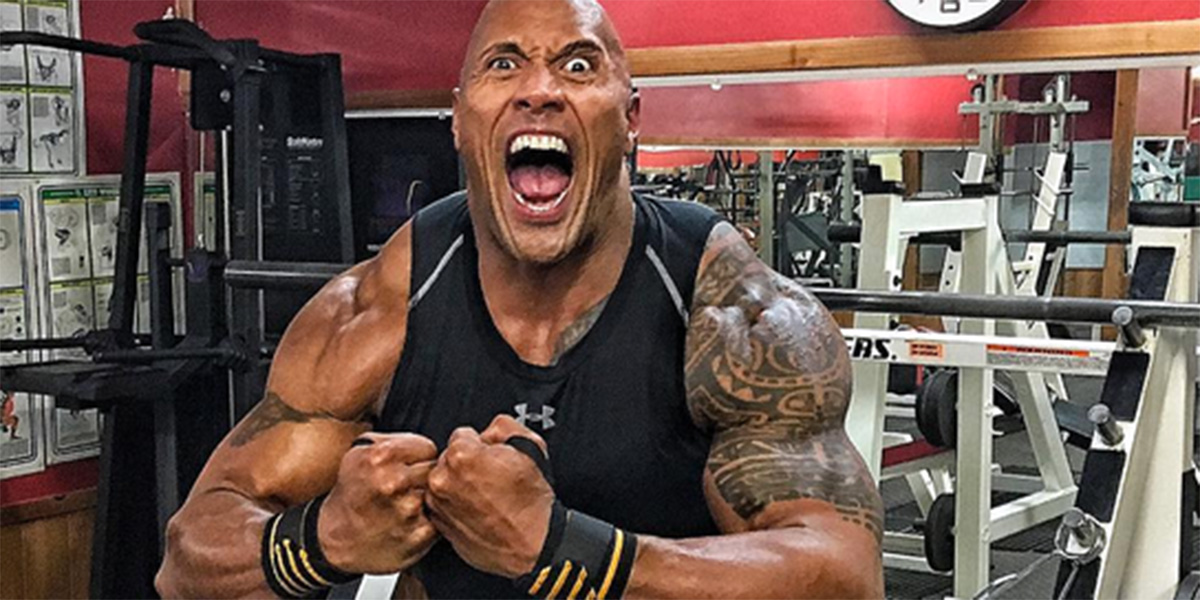 Start your week off strong, be productive early, kick ass and carry that momentum thru.

When not bulking up, Dwayne Johnson told Instagram he weighs 240 pounds (109 kg). In fact, for Baywatch, The Rock weighed in at 238 pounds. However, he’s almost always pumping iron to get bigger than this for his television roles.

The Rock says strength training is his ‘anchor’ in his life:

You always want to protect the thing that allows you to do what you do. In this case, my “thing” to protect is my training. Regardless of what time zone I’m in, or getting pulled in a thousand different directions or how little sleep I’ve gotten – I’ll always find a way to train, get after it and push thru. Training is my anchor – it centers me and allows me to then work a full 12-14 day of business. Find your anchor. Protect your anchor.

On Instagram, The Rock talked about his weight and strength training. Dwayne Johnson had to get a lot leaner for Baywatch. The Rock looks leaner in the Baywatch picture with Zac Efron. 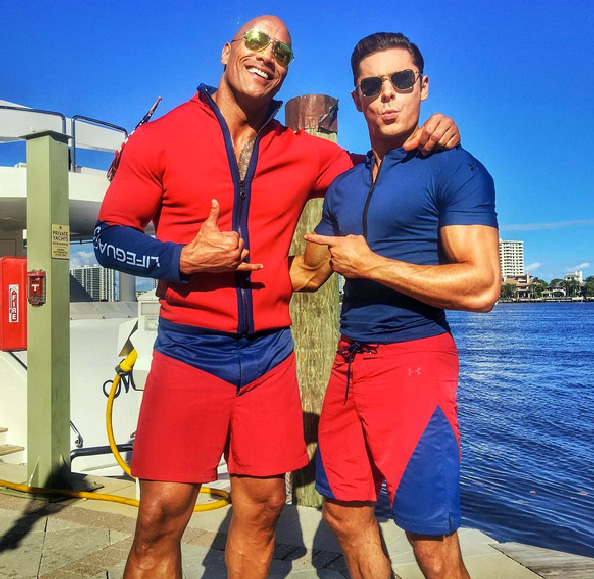 The plus side: Getting lean helps sculpt and define your arms. Noting the difference between playing Mitch Buchannon and Luke Hobbs:

Mitch Buchannon to Luke Hobbs.. .I came in at 238lbs of lean, mean, rated R comedy machine. Plus, I had to be leaner cause we had to look at my boy @zacefron’s insanely ripped 28 pack abs every day.. *yawn.
For Fast & Furious 8, I’m stepping on set 260lbs of the meanest, strongest and most highly funny & entertaining $hit talkin’ version of Hobbs the franchise has ever seen.

The down side: The Rock didn’t spend as much time getting massive arms. But, that changed once he transitioned from Baywatch to Fast & Furious 8.

The Rock Diet for Fast & Furious 8

Talking about his diet for Fast & Furious 8, The Rock says the key to getting massive arms is your diet. He told Instagram:

The 6,000 calorie per day diet, training and focus is hard core. When you see Fast8, it’ll all make sense. And when you see where we’re going with the character in the future it’ll really make sense – and you guys’ll reaaaaallly dig it. 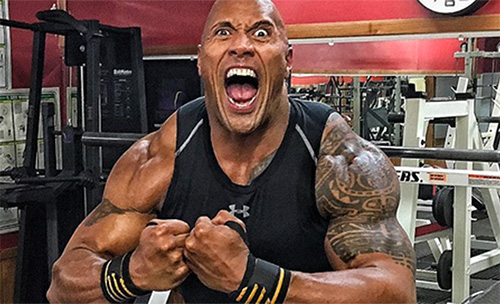 This workout shows you how to get massive arms. See the rest of the Workouts in this series here:

Thursday – Get That V-Shape With The Rock’s Back Workout