The Gerard Butler 300 Workout Wednesday routine starts with rowing. This warms up the upper body and legs. Then, you move into a barbell or dumbbell speed circuit.

Gerard Butler says about his trainer and the “300” Workout:

Regarding the relays, the Spartan trainer Mark Twight says:

By sharing hardship together over a period of time, with team interplay where they compete against each other, they come out as a fighting force that is believable on the screen. It changes the way they move and how they behave as a unit.

The Gerard Butler 300 Workout Thursday routine starts with an upper body routine that focuses on the chest, shoulders, and back.

Chest/Shoulders/Back: (Same as table above, described in detail)

Dirty 30’s: (Do following 3 exercises, you have 1 minute to complete each. Use remaining time to rest. 3 sets. Record your reps/distance traveled in the 1st set. Perform that same rep/distance the next 2 sets. If you finish in under 1 minutes, you get to rest.)

Instructions: Pick 3 cardio exercises, like the ones the Gerard Butler used, above. Go for 1 min each, done 3 times. Find a challenging amount of reps you can do in 50 secs. If you go fast in the following sets, you get rewarded with rest. The only rest you get is if you finish in under 1 minute. If you start to dog it, you lose that rest time.

Here’s the 2nd workout of the day:

The Gerard Butler 300 Workout Friday Routine starts with chest/shoulders & cardio. Then, you move to biceps & shoulders. (The 300 workout is big on working your shoulders, as they provide a lot of functional strength). Finally, you go all out with the Tailpipe workout.

(2 minutes rest, then progress to the 3 exercises, below)

Do 45 secs of each exercise. 2 sets through: 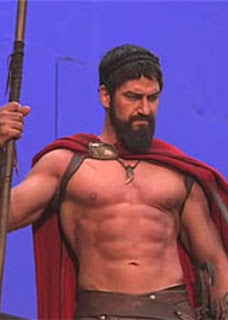 2nd workout: “Sparrow’s Dozen” 12 total rounds of exercises below is what they call at Gym Jones the “Sparrows Dozen.”

No Medicine Ball? Substitute Roman Chair Leg Raises. 12 total sets of each exercise above is the “Sparrows Dozen.” It’s a challenge. The 300 actors worked their way up to this rep range.