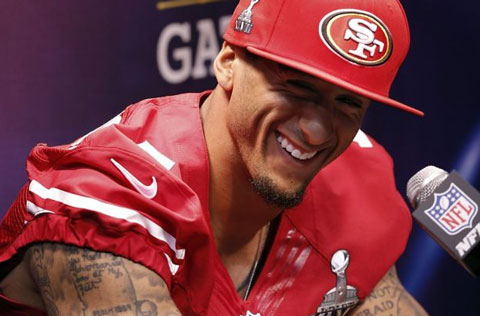 He’s a specimen, but he just doesn’t float on those genetic gifts, so he really pushes himself. When you combine that with [his] talent, you see some things that are really special.

The 5 goals of the Colin Kaepernick workout, according to his trainer are:

For the Friday workout, they do a “Road Trip Friday” routine. This includes running hills, sand dunes, or other outdoor activities. When asked about a specific workout, Kaepernick’s trainer says that it varies every time to challenge Kaepernick.

This mix up of the workout routine mimics the change in routine. On Fridays during 8 games of the NFL regular season, Kaepernick travels to away games. This Friday workout helps to change up the routine.

The field work they do together is especially important. Colin Kaepernick is trying to get better at avoiding the rusher and taking off quicker when he needs to escape the pocket. His trainer says:

He knows he has linear speed, so we’re working on how he adapts and reacts to someone coming at him. He’s taken a lot of pride in working on those things.

He’s there twice a day, six days a week, and Colin will spend anywhere from 4 to 5 hours training. He’s always doing extra. Getting there early, staying late, and he’s very coachable. 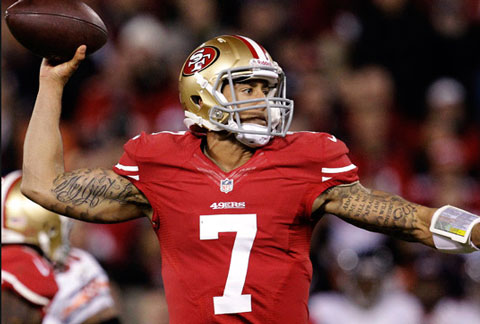 Coin Kaepernick top exercises, according to Train Magazine and his trainer, Ryan Capretta:

With [the deadlifts], he takes a lot of pride in the form of it, keeping his hips level, overloading with heavy weight and working on balance and stability oat the same time.

Colin Kaepernick does a lot of pushing/pulling on upper and lower body days. This helps to work both sides of the muscles. Often, they incorporate many planes of motion to help work the core. Regarding the Rotational Pulldown, Ryan Capretta says:

I like those types of exercises for him because he is strengthening his back while stabilizing different planes of motion.

For field work, Kaepernick and Capretta do a lot of exercises that focus on improving Colin’s athleticism. They go-to exercise is to use Bungee-resisted drills. Capretta says:

We’re working on athleticism and not just specific movement patterns with this, so he will do a lateral movement right into a burst.

When Colin is working out, he focuses on doing both pushing and pulling. For example, if he does 6 bench presses at heavy weight, he isn’t going to stop there. His trainer finds a complementary pulling exercise, like dumbbell rows.

The upper body workouts consist of working chest, back and arms. The lower body day works on the core, quads, hamstrings and calves. Both sessions focus on a lot of lateral and rotational movements specific to the quarterback’s needs (like throwing the ball and escaping pocket pressure).

Colin Kaepernick’s workout motivation stems from him wanting to be the best. His trainer says that:

[Colin] understands what he has to do to get better and is competitive with other guys and himself. If you tell him his previous numbers, he’s super eager to beat that. Every single workout he pushes himself to the max to get better.

He has a clean diet and I know he has his supplements dialed in. He takes that very seriously. With the intensity he trains [at], he knows recovery is very important and he’s very consistent with that.

Talking about the Colin Kaepernick diet, his trainer says:

He doesn’t have an off-day or a day where he doesn’t follow his nutrition. He buys into the whole system and really has a comprehensive approach. 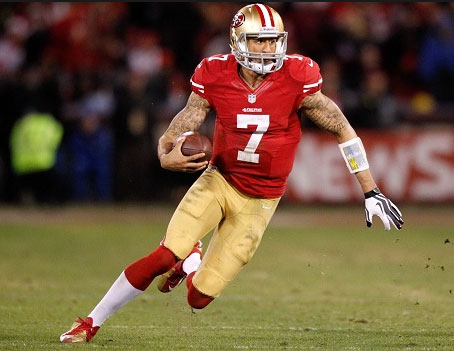 Can you think of anyone interested in how Quarterback Colin Kaepernick stays ahead of the competition?