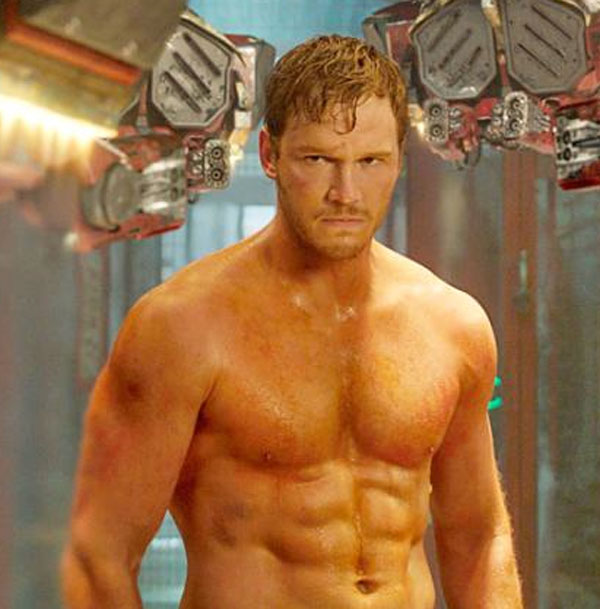 The Chris Pratt workout transformed him from Andy Dwyer into a Superhero. The Guardians of the Galaxy workout helped him drop over 60 pounds in eight months. On top of that weight loss, he also added a more muscular physique. To do all that, Chris Pratt worked out 5 days a week, for 4 hours a day, and ate 4,000 calories. 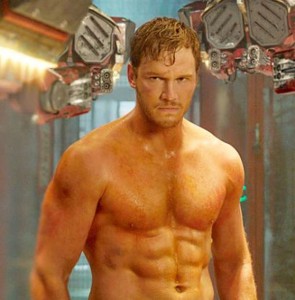 The Chris Pratt workout started with heavy bodybuilding, but then shifted to fat-burning cardio circuits over time. Chris Pratt said that he was tired of that “chubby sidekick” role he is always cast. The formerly homeless (lived in a Scoobie-Doo van in Hawaii) actor wanted to become a Superhero. Namely, Peter Quill, the Star-Lord in “Guardians of the Galaxy.”

To do so, Chris Pratt would need the right workout and trainer. He would have to transform from the funny-but-pudgy Andy Dwyer character we know from Parks & Recreation into a superhero. Because of his overweight physique, “Guardians” Director James Gunn had to be persuaded to let Pratt audition. 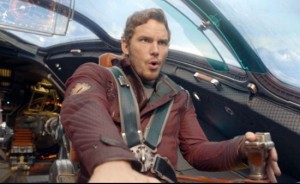 However, the director was easily won over by the audition, as he imagined just how Chris Pratt’s charm and dedication could fit the part. Still, the Chris Pratt workout was very demanding as he had to fit into the costume somehow. Plus, Pratt’s conception of what this Superhero should look like was very demanding, as well.

Chris Pratt says his workout and diet lasted 8 months. This included 5 months of working out before shooting, and 3 months while shooting. 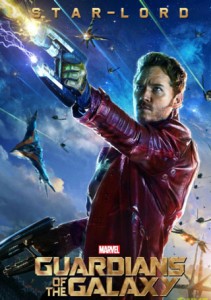 Guardians of The Galaxy Workout 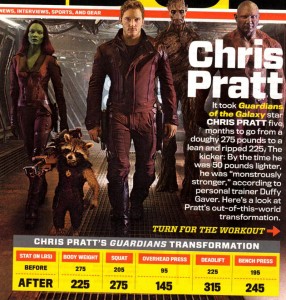 In the last stage, right before filming, the focus included 3-4 hours a day of cardio, while still hitting the gym when they could.

The Chris Pratt Workout for Guardians of the Galaxy had three phases (action taken / purpose of workout):

Personal trainer, Marine sniper and former Navy SEAL, Duffy Gaver says his clients range in what they can do starting out. But, no matter how much they can lift, he uses the same bodybuilding template with all his clients. Taking Adam Sandler as an example of someone who got in shape, Duffy’s clients are usually amazed at what they can do in the end.

For Guardians of the Galaxy, Gaver used the following workout routine to get Chris Pratt buffed up. Once bulked, they transitioned to more cardio-focused workouts. Gaver shared this workout with Bodybuilding.com, as well as, Muscle & Fitness. 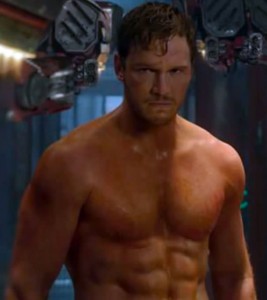 The Chris Pratt Monday Back Workout:

Chris Pratt would also start each workout with a 10 minute treadmill workout. Men’s Fitness claims he got up to 5.0 on the treadmill.

The 1st 2 exercises are done as a Superset. This means you pullups and pushups back-to-back. Normally, you rest a minute between exercises. For a Superset, there is no rest between the two exercises.

I’ve been fat for the last 8 years. I loved eating food, drinking beer and having fun with my life. But, I got depressed a little bit when I was fat. I think there’s probably people out there who can agree, and understand what that feels like. And I tell them: Hey, if you just like bust your a$$ and get after it, all it takes is 6 months really. 6 months flys by, whether your working out everyday, or you’re not. So, if you feel compelled to try to do something about, just do it. 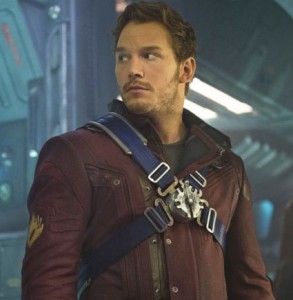 Here, the last 2 exercises are done in a Superset. This means you do a set of weighted dips, followed by a set of Standing Cable Flys. Normally, you rest a minute between exercises. For a Superset, there is no rest.

My recipe for fitness isn’t complicated. Train amazing, eat amazing and sleep amazing. It’s a three-legged stool. You need to do all three to get the results you want.

For the Legs Workout, you Superset the last three exercises. This means you do Leg Extensions, Leg Curls and Standing Calf Raises all at once. Rest one minute. Then, repeat this Superset.

The Leg Press Strip Sets means that you start with as much weight as you can do just a few times. Duffy Gaver tries to get his clients to work up to 6, 45-pound weights on each side.

After those reps, immediately remove a plate from each side. Again, do as many as you can. Repeat this process until there’s just one plate left on each side.

Talking about changing from being fat in Delivery Man to getting fit for Guardians of the Galaxy, Chris Pratt talks about his diet and work ethic:

People want to know what the secret is. The secret is you can’t do it in a month. It takes 8 months, and/or a year, or a lifetime….of consistency, working out every single day, and eating properly and truly feeding yourself. Not starving, but giving yourself proper nutrition to heal. You have to burn off all the crap you put in your body. And then you have to replace it with really good food, and fuel. And it takes a long time, but really, 8 months isn’t a long time. Time is going to go by just as fast, whether you’re working out or not. So, who do you want to be in 8 months? 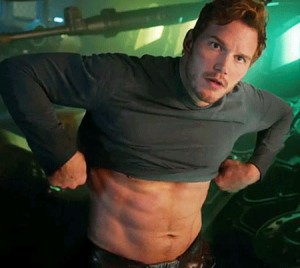 Duffy Gaver says that transforming your body is something you really have to want to do. The mechanics haven’t changed much over the years, though there is more temptation to go astray. Regarding sticking to a gym routine and eating a clean diet, Gaver told Muscle & Fitness there is no secret other than motivation:

Nothing’s changed. The stuff that Arnold was doing in Gold’s Gym still works. This stuff has been around forever. And it doesn’t matter what I do. They have to want it. You’re effort, intensity and discipline is a necessary thing.

The Shoulders workout includes a Superset of Lateral Raises, Front Raises, and Rear Shoulder Raises. This means you do all three exercises in-a-row before resting. For the Arnold Press, Duffy has Pratt start with his arms facing towards himself. They also did Overhead Press to measure Chris Pratt’s overall strength and gains. 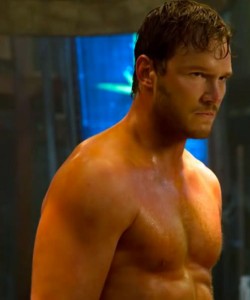 He’d lift weights four or five times a week for an hour at a time. For the first few months it was mainly traditional bodybuilding sessions to add size, targeting specific muscle groups on separate days. Towards the end we started mixing things up and adding in circuit training and P90X workouts to help get him lean.

The Friday Arms Workout has 3 Supersets. You do 2 exercises in a row, without rest. Then, you rest for 45-60 seconds before doing the same Superset 2 more times. Move onto the next Superset when you’re done with all 3 reps/sets.

On the hammer curls, Duffy Gaver has Chris Pratt choke up on the dumbbells. This makes the exercise a bit harder, and focuses on widening the biceps–something important for a Hollywood Superhero. 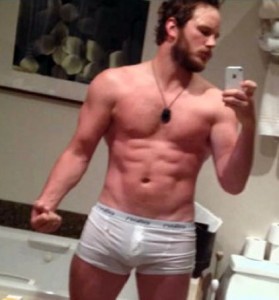 Even while doing the bodybuilding phase, Chris Pratt was really focused on weight loss. Having gained 60 lbs. of fat for Delivery Man, Pratt decided to do 3-4 hours of cardio a day. Pratt says his cardio workouts consisted of:

Asked if he did anything outside of the gym, Duffy Gaver says:

Yeah, he was really active. He did a lot of mountain biking, running, swimming and kickboxing. Adding these kinds of sports helped to keep things varied and enjoyable.

Duffy Gaver’s assistant, Anthony Genova, would work with Chris Pratt for the cardio portion. Then, when it was time to lift weights, Duffy Gaver would take the lead. Talking about the intense approach Chris Pratt was taking, Duffy Gaver says:

Read on to Get the Chris Pratt Cardio & Conditioning Circuit Workouts.