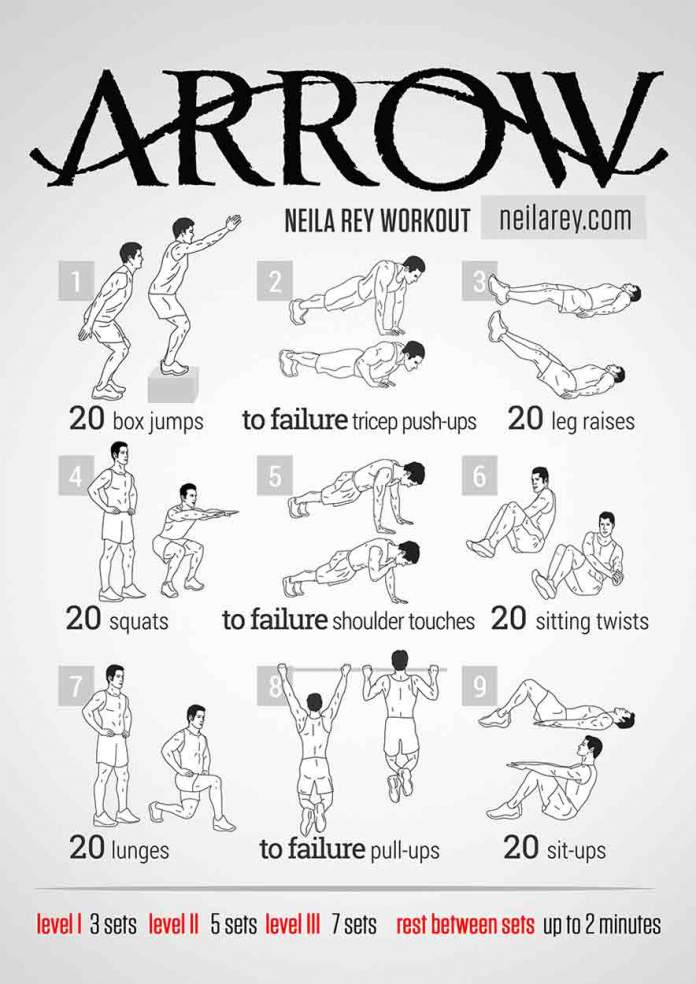 The Arrow Workout is a total body routine. Use this bodyweight routine to look like Stephen Amell from the hit TV show Arrow. The focus of the Arrow workout is on circuit training that works your whole body. The main focus is on the lower body and abs.

Here is The Arrow Bodyweight Workout: 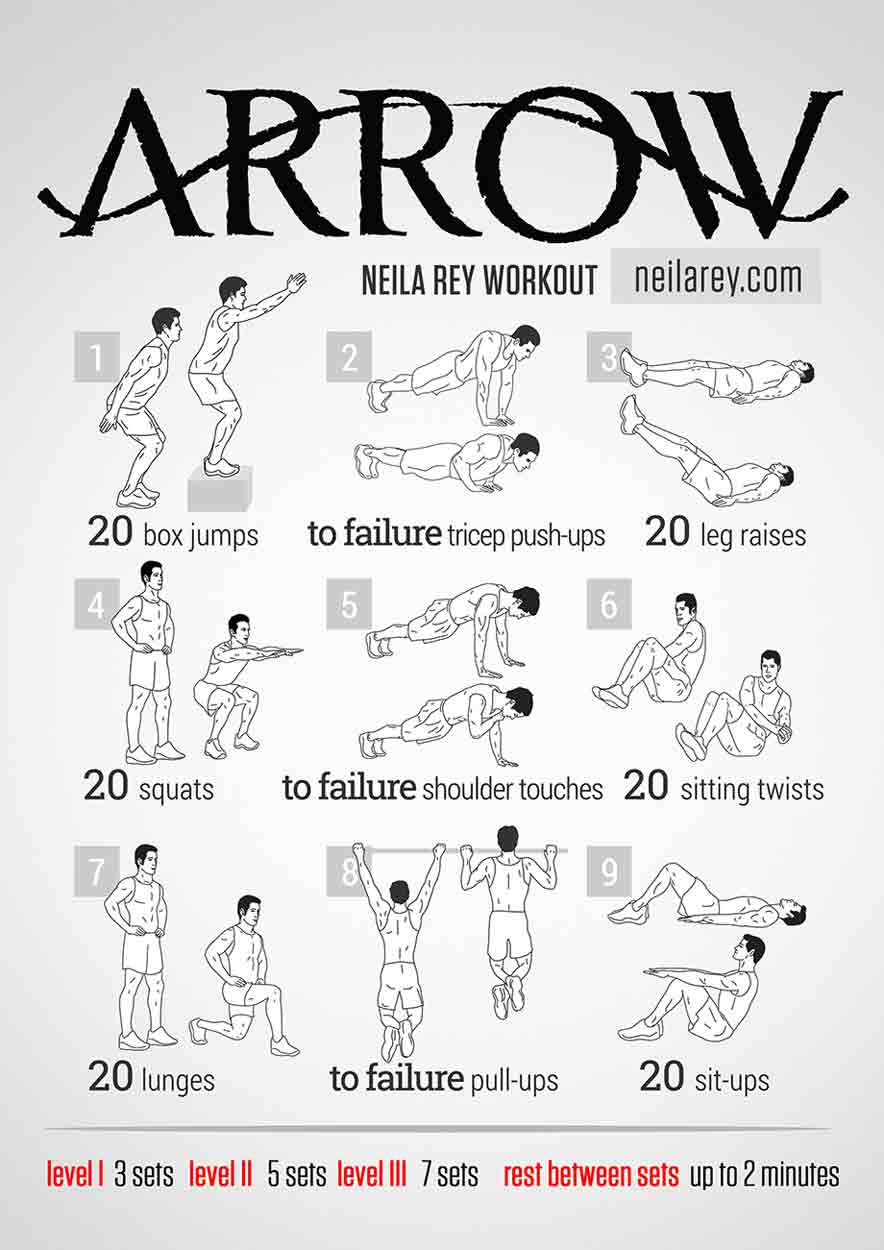 Bodyweight circuit training means that you do the workout over and over. You do one set of each exercise, then move onto the next exercise. Using your own bodyweight becomes harder the more circuits you do. The number of circuits right for you depends on your fitness level. Try to start with Level I or II, and work your way up to Level III or beyond.

Catch your breath (rest) for up to 2 minutes between each round. Reduce this amount of time to unlock and harness the true power of bodyweight circuit training. You will find that shortening your rest periods turns this into a HIIT workout. HIIT workouts are the best way to burn fat. Increase the fat-burning aspect of circuit training by slowly minimizing the amount of rest between circuits.

Arrow actor Stephen Amell says he uses all type of bodyweight training to get in Arrow shape. He says you don’t need a gym at all to get in a workout. In fact, it’s more fun to workout outdoors, says the Oliver Queen actor. He has stated in interviews that he does bodyweight training, because that’s what his character would do in real life.

About the Arrow workout, actor Stephen Amell says he likes bodyweight exercises. They have applications to real life:

The most impressive things I do on the show are when I can manipulate my own bodyweight. And that really is the true test of strength. I’m much more impressed if somebody can do 30 pullups, than can bench 300 pounds. Because one has an actual application in the real world, theoretically. The other is really just for show.

These workouts were created by my friend, Neila Rey. You can find Neila Rey on Google+ here. With all these workouts, it is good to switch them up. Especially, if you have “Workout ADD.” That’s why all these bodyweight workouts were created in the first place. To avoid the same repetitive gym routine every day. Instead, you can choose a different one every day. This way, your workout doesn’t feel stale. By doing different superhero bodyweight workouts, you avoid the same repetitive gym routine every day.

This workout was inspired by Stephen Amell in Arrow, but not the actual workout. To see the full article on The Stephen Amell Workout For Arrow, check it out here. The Arrow workout uses your own bodyweight to get in shape. In addition to his bodyweight routines, Stephen Amell also likes to do free running:

To get in Arrow shape, Stephen Amell likes to incorporate Parkour, or Free Running, into his workouts. This takes bodyweight workouts to a new level by adding cardio and stunts. The Arrow Free Running Workout mimics exactly the kind of stuff Oliver Queen would do.

Here is a video of a recent Facebook post from Stephen Amell doing his Free Running workout to get in Arrow shape. It is exactly the kind of workout he thinks Oliver Queen would do. Since Stephen Amell does all of his own stunts, this is good practice. He has to train hard to be able to do everything required of him.

This video interview sheds light on how the Arrow actor uses bodyweight workouts to get in shape:

Know anyone who wants to look like Oliver Queen from Arrow?

(To see the full article on The Stephen Amell Workout For Arrow, check it out here.)