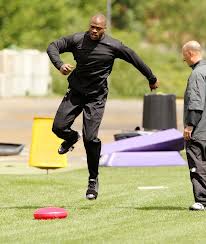 Single-leg squats give him the ability to be better at agility drills, where he is often shifted onto one leg. Also, defenders often have one of his legs wrapped up, so he can only rely on one leg. The Adrian Peterson workout is about developing the leg strength to shed defenders. 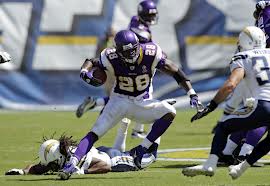 Most importantly, Adrian Peterson enjoys working out. His teammates often accuse him of being a robot. Not, in the sense he has no emotion, but in that he never quits. Even when people questioned how well Adrian Peterson could recover from injury, his teammates knew he could.

He’s even gotten the nickname: AD, or All Day, because he goes all day. Peterson says he got the nickname as a kid because of his high energy levels, that kept him active and intense all day long. Peterson was determined he was going to play in 2012. Here’s a video about Adrian Peterson’s background story:

After practice, Adrian doesn’t relax. Instead, he does something that goes back to his University of Oklahoma days. He does what he calls “three-trippers.” This means that he does 3-4 sprints of the entire field after practice. At first, he did them alone. Now, he has gotten Sidney Rice and Marcus McCauley to run with him. 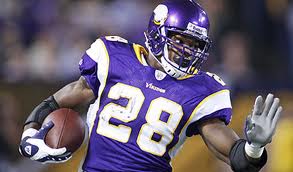 After sustaining a season-ending knee injury, Adrian Peterson did a lot of rehab. It focused on re-gaining strength and the ability to change direction:

Adrian Peterson has come from a lot of adversity including:

It was football that helped Adrian Peterson recover from all this. He works out harder than ever, determined to be the best NFL football player ever.

Adrian Peterson currently weighs around 218 pounds. But, he’d like to add a few more pounds of muscle through proper diet and exercise. He doesn’t want to increase his weight unless it comes from muscle. So, he likes to stick to baked, not fried foods, including baked: 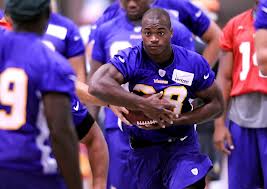 On a typical day, Adrian Peterson says his diet looks like:

Know anyone who can benefit from the Adrian Peterson workout?

Looking for more Celebrity Workouts For Men? Get The Best Male Workouts Here!
Back to Page 1
Prev2 of 2Next post